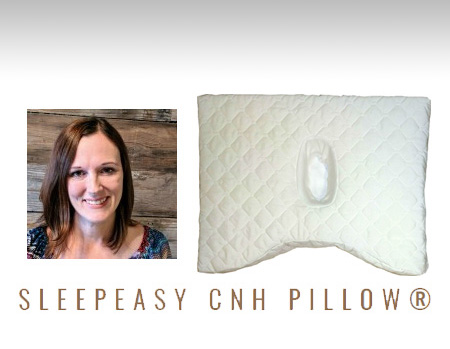 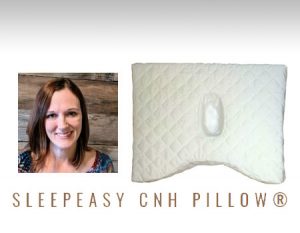 Amanda Horner took over the family business in 2014 and has grown sales by exploiting online channels. But this is no ordinary business. Her father, Dr. Cannon, invented a pillow to give his dermatology patients relief from a condition called CNH – pressure sores on the ear – and he successfully marketed his invention while continuing to practice medicine.

While her parents made a success of the SleepEasy CNH Pillow, it remained a side business until Horner took over, but it wasn’t easy for her, knowing the fate of her father’s invention was in her hands.

“When I took over, there were some things I changed immediately, and there were others I felt I couldn’t touch – “Can I DO that??” Because Mom and Dad always did it a certain way, and they always resisted when I urged them to change. When it was finally up to me, I was reluctant.”

A Unique Product
The CHN Pillow is different from many items you find online, and Dr. Cannon found marketing success by reaching out to doctors by mail and by exhibiting at dermatology conferences. He would provide dermatologists with brochures to hand out to patients.

Times change, however. “In the last few years, especially as the doctors get younger, they don’t want brochures anymore. They don’t want them cluttering their waiting rooms, and an increasing number of them just ask if we can be found on Amazon.”

Horner’s parents had created a simple website with a PayPal button, but she now hosts her shop on BigCommerce at CNHPillow.com. She also sells through numerous platforms in addition to BigCommerce, including Amazon and eBay, and she uses a number of tools including Quickbooks Online, Unify, Shipstation, PayPal, and Stripe.

While she said she doesn’t think she made any big mistakes getting started, there were lots of little things she wishes she had known earlier. Here are some of the lessons she learned along the way.

#1 Offer free shipping
Horner knows all too well there’s no such thing as “free shipping,” but she instinctively felt it was important to include shipping in the price so her customers would know the total cost up front.

“I was afraid to raise my prices (to include the shipping) and call it free shipping. But when I finally got brave enough to do it, sales jumped.”

#2 Offer discounts
Horner began experimenting with offering discounts on her website. “I wish I had started doing that earlier, because people love discounts! And seniors love a senior discount. They would ask me if we had a senior discount, and I would say no: nearly all of our customers are seniors. That was dumb. Now I have it built in. It’s on the website, and I offer it over the phone, and they love it.”

However, because Amazon “really, really takes care of its buyers,” it takes a toll on sellers. In addition, “They keep raising the amount of money they siphon off the top of our sales. All things equal, I make far less per item sold on Amazon than anywhere else.”

#4 Use eBay for international reach
Horner calls eBay a hidden gem. “The number one reason we’re on eBay is because they have an awesome Global Shipping Program. We don’t sell a ton of pillows to international customers, but we do sell some, and international shipping costs plus import fees are hideous.”

“We used to do our best to make sure the customers were informed about the fees, that we had no control, and that they could even exceed the cost of the pillow. But sometimes they wouldn’t read our email, or would ignore the info at checkout, and when the package arrived and they were presented with a fat bill by the delivery service, they would be understandably very upset.”

#5 Prepare for Returns
Returns are a challenge for most retailers, online and off. But certain products prove especially tricky, such as bedding items like pillows that can’t be resold once opened.

The CNH Pillow is sent wrapped with a plastic seal and includes a neon orange sticker on the plastic that says “If this plastic is opened, it is not returnable.”

“Instead of accepting no returns, like before we took over, we now accept returns within 30 days for any reason, but we charge a 25% fee if the plastic seal is broken. Then we lose the sale, and we can’t resell it, but at least we’ve gotten around cost for it. And the customer isn’t completely out of luck.”

However, between 1/4 and 1/3 of the returns she receives on Amazon are cases where buyers have selected “defective” as the reason for the return even though they haven’t even opened the product. That’s because for a defective product, the buyer doesn’t have to pay the return shipping, Horner explained. As a result, “Amazon thinks I’ve sent out numerous defective pillows,” when it may be the buyer thinks the product is too soft or too firm, or doesn’t like the fabric, or for other reasons that have nothing to do with the quality of the pillow.

In addition, all returns on Amazon are now automatically approved, and the cost of the return label is automatically deducted from the seller’s funds. “It’s hard to see anything good about that from my perspective. If I call out buyers on their dishonesty, if I deduct fees from their refunds, if I do anything other than just approve the refund and move on, I am rewarded with a negative review.”

#6 Get reviews from customers
Horner advises sellers get reviews, and her two main tips: beg and pray. “You can have hundreds of super happy customers, and one disgruntled angry customer, and you know which one will leave the review.”

Horner crafted a postcard size insert (written in large print for her senior customers) that requests buyers call if unsatisfied or leave a review if satisfied. She includes instructions on how to write a review on the CNH Pillow website, Amazon, and eBay.

She also uses a service through BigCommerce that is set up to email customers a couple of weeks after the sale asking for a review.

“After we got some “Your pillow saved my life” reviews, the occasional “Your pillow is horrible” review wasn’t the end of the world. Maybe someday, when we have tons of good reviews, I won’t live in fear of Amazon customers anymore.”

Interestingly she feels there’s a difference between Amazon and eBay buyers. “Amazon reviewers don’t hold back. eBay reviewers are typically kind, even when critical. Website reviewers are not to be feared, because they can be deleted.”

#7 Use an online accounting system
Horner was familiar with Quickbooks, but she wishes she had started with an online accounting system rather than a desktop version. “If I had known how much time I would waste on entering the same data into several systems, the online version would have been a much better decision from day one. I had no idea how everything could connect online and save time.”

A Steep Learning Curve and a Family Legacy
Horner said that when she first took over, she was busy trying to figure out the nuts and bolts of setting everything up, getting the accounting done, and shipping out orders. She didn’t have the time or energy to explore some of the things she wanted to implement. She lacked the income to hire help and the expertise to know where to start. “It’s been a very steep learning curve and I often feel I’m still at the bottom.”

She continues to tackle Google Adwords, which she finds confusing and costly but necessary. And on her list for this year: get her products on Walmart and Facebook.

If she faced the decision today to take over the family business, would she do it again? Absolutely. “I love what I do, and it makes me happy to help people feel better. Our buyers tend to be elderly, and they frequently tell me about how awful their ear pain is – and sometimes they call me back to tell me how much better they feel a week or two after they start sleeping on the pillow! It’s satisfying.”

It’s also personal for Horner. Of her father, the inventor-doctor, she said, “He went to the marketing department at a local university and was told not to bother with it, because it would fail, but he did it anyway.” It seems Horner has inherited her father’s persistence along with the business.