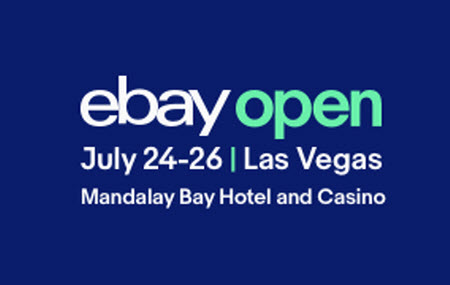 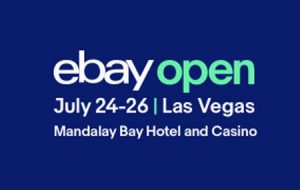 eBay hosted 2,000 sellers at eBay Open in Las Vegas in July – over 60% of them first-time sellers. It also held its annual Top Seller Summit directly preceding the conference, attracting about 300 eBay top sellers representing more than $2B in GMV. (eBay defines Top Sellers as “large, merchant-size businesses with annual sales of $1 million-plus.)

“Modernizing the eBay Platform” was the underlying theme of eBay Open, where 325 eBay employees were on hand staffing the event.

Managers presented information to attendees about the beta payments test it will kick off in September, and if you’re considering participating, there are some important things you should know that came out of the eBay Open session – read more on this EcommerceBytes Blog post.

While in previous years viewers at home were treated to live webcasts of sessions where eBay managers and techies described the changes being made to the platform, eBay only live-streamed speeches from CEO Devin Wenig, Senior Vice President Scott Cutler, and the Shine Awards ceremony. It planned to publish videos of workshops in the weeks following the event – presumably eBay wanted time to edit the video presentations.

Two Big Announcements
On the first day of the event, eBay announced a deal with Square Capital to offer financing to sellers. Such services have been available to sellers for years, such as Kabbage, which became available to eBay and multi-channel sellers in 2010, and from PayPal, which launched PayPal Working Capital in 2013, when it was still owned by eBay.

eBay also announced a deal to accept Apple Pay. During his keynote address, Devin Wenig said he wants choice for buyers and simplicity and lower costs for sellers. He said PayPal will still be an option, but he said it shouldn’t be the only option. Of course, that’s what sellers have been telling eBay since 2005 when it rolled out its policy restricting sellers’ use of payment methods beyond PayPal and when it restricted paper payments (cash and checks) in 2009.

Don’t expect a sudden influx of Apple Pay payments, however – as we reported, eBay is opening up its beta payments program in September to a small percentage of sellers. Per its 2015 breakup agreement with PayPal, it must transition to taking over as its own payments intermediary in stages.

What Wenig didn’t say but was revealed to eBay Open attendees: eBay will ban PayPal from the beta testing – see this blog post for more information and seller reaction.

Modernizing the eBay Marketplace
During his keynote, which we covered in this Newsflash article, the CEO was asked what eBay was doing to attract new buyers and retain them. His goal: increase eBay’s buyer base from 175 million to “half a billion” buyers. To get there, eBay has to do the following, he said: modernize the platform; get better at customer service; and get quality sellers and inventory on to the platform.

eBay Senior Vice President of eBay Marketplaces for the Americas Scott Cutler also spoke about modernizing the eBay platform during his keynote address. “We must have a modern marketplace that meets modern expectations, and we have to do this together,” Cutler told attendees. While that sounds like a worthy goal, it may strike fear in the hearts of sellers: glitches often result from changes, and buyer-friendly policies can be costly to sellers.

Cutler, who took over last summer after his predecessor Hal Lawton left to head Macy’s, explained what he meant by making eBay more modern. “eBay is an incredible marketplace because of you. Diverse sellers, with a diverse set of products. But sometimes this has led to an inconsistent experience for our customers. In order for us to remain competitive, we need to deliver a consistent experience that is inline with modern retail standards.”

He said customers have expectations that include fast and free shipping – 3 days or less. eBay Guaranteed Delivery has 80 million eligible items, millions of which ship for free. He said 30-day returns are standard, and that’s why eBay is working to “remove the pain” through simplified returns policies. He also boasted of eBay’s customer service, calling it “one of our most important strategic assets.”

Apology for Recent Glitches
As sellers were gathering in Las Vegas to attend the conference, eBay issued an apology for its latest glitch, admitting it had irretrievably lost some sellers’ photos, and Devin Wenig addressed the issue in his presentation.

In answering a question about what eBay was doing about the numerous site glitches, the CEO called them unacceptable and said he was “pissed off” about them and had made changes to the team. “I hold my team accountable. It’s not important, it’s an internal matter, but we’ve made changes to people and teams, because shipping product that isn’t ready is not okay. It’s not okay with me, and it’s not okay with my team.”

eBay executives didn’t address the third and final seller update for 2018, which came 2 weeks after eBay Open, on August 7th – you can read more about the Fall Seller Update here.