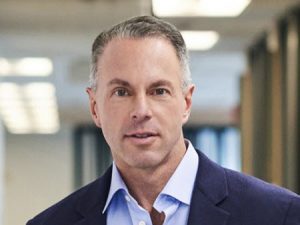 eBay CEO Devin Wenig spoke on Tuesday at the eBay Open summit where he answered questions from eBay sellers that were presented by “celebrity” seller Corri McFadden. About 2,000 sellers are attending the event in Las Vegas this week, according to eBay head of North American Marketplaces Scott Cutler, and over 60% of them are first-time sellers.

Wenig said he was faced with two choices when he took over as CEO 3 years ago after the split with PayPal: nibble around the edges and make marginal improvements, or solve difficult issues and modernize the platform. “I’m super proud of where we are,” he said. “eBay’s never been bigger than it is today.” (He didn’t say by what metrics he’s making the comparison.)

“How many Internet companies that were born in 1997 are even alive,” he asked, then providing the answer: five. “eBay’s best days are in front of it,” he said, adding that he’s never been more optimistic about the company or the platform.

After discussing the state of retail and describing past industry disruptions, he outlined what he believes eBay has to do: “our job is to adapt, and give both sellers and buyers what they need, and invest into these big computing platform shifts that have disrupted others.”

Wenig was asked what eBay was doing to attract new buyers and retain them. “I start and stop with the product and customer service,” he said.

“The first thing you do is build a great product, the first thing you do is service customers really well.” He said eBay has 175 million buyers – “that’s not even getting started.” It’s a good number, he said, “but I want half a billion buyers.” To get there, eBay has to modernize the platform; get better at customer service; and get quality sellers and inventory on to the platform, he said.

Then it’s time to market – and eBay will invest more in marketing in the second half of the year than it ever has, he said. “We’re going to spend a lot of money to bring new buyers on to the platform,” particularly in underpenetrated markets such as millennials and women.

When asked about eBay’s decision to take over payments management on the platform (in the future, buyers will pay eBay instead of paying sellers directly), Wenig said what he wants is choice for buyers and simplicity and lower costs for sellers. eBay announced today that it will accept Apple Pay mobile payments through its beta testing that begins in September.

In answering a question about what eBay was doing about the numerous site glitches, Wenig called them unacceptable and said he was “pissed off” about them and had made changes to the team. “I hold my team accountable. It’s not important, it’s an internal matter, but we’ve made changes to people and teams, because shipping product that isn’t ready is not okay. It’s not okay with me, and it’s not okay with my team.”

eBay had webcast much of last year’s conference, but this year it has scaled back. You can follow the event on social media using #ebayopen2018 and view webcast sessions on this YouTube channel.