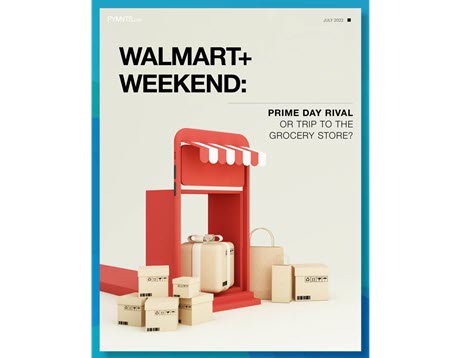 A new report, “Walmart+ Weekend: Prime Rival or Trip to the Grocery Store?” identified some fundamental differences between shoppers who join Walmart+ versus Amazon Prime.

Regardless of age groups and income brackets, most Walmart+ members joined the program for groceries or gasoline. By comparison, Prime members were more concerned about free shipping and access to Prime video.

PYMNTS estimated Walmart+ has 51 million subscribers in the US compared to an estimated 171 million Amazon Prime members.

The share of Walmart+ members who cited free shipping as their top reason for subscribing was 25%.

The share of Prime subscribers who cited free shipping as their most important reason for subscribing was 64%.

“With inflation at record highs, savings was cited as another big reason people signed up for Walmart+, with 37% of respondents pointing to discounts as the reason for becoming members compared to 31% of Prime subscribers,” according to PYMNTS. “Walmart+ members also frequently cited special savings as a major perk.”

A link to the full report is found on the PYMNTS.com website.