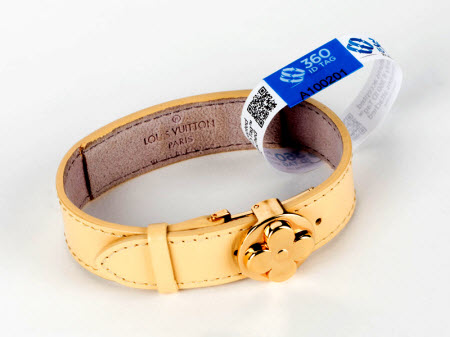 For online merchants, few things are as aggravating as receiving a return from a customer and discovering that it’s been used and abused – or perhaps not even the same product the customer purchased.

Stories of clothing returned with sweat stains or boxes containing rocks instead of electronics are common on industry discussion boards.

One online seller set out to do something about it and created a product designed to stop returns fraud in its tracks.

Chelsea Duhs began selling on eBay in 2010 and found her niche: high-end designer dresses. She quickly realized she needed a way to protect her merchandise from “wardrobing” – the practice of buying clothes, wearing them, and returning them.

“There was one Emilio Pucci dress in particular that I had for sale, it was a real statement piece that retailed at $7,500 – it was because of this dress, and a couple of others that I had in inventory, that I knew I needed a way of protecting my merchandise from wardrobing. It didn’t help that the manufacturers tags were on the inside of the dresses either,” she said. The placement of the manufacturer tags would allow buyers to wear an item in public and return the clothing after use with tags intact.

Duhs came up with the idea of the 360 ID Tag. “The goal was to create an easy to use system for both sellers and buyers that works simply by looping a durable security tag through merchandise and sealing both ends with a tamper-evident security seal complete with a unique ID number.”

The tag acts as a deterrent, she explained, and it’s easy to see why. First, sellers can show their products with the tags in the product photos in their listings. Second, upon receiving an item, the customer sees a prominent message on the 360 ID Tag attached to the product: “Returns accepted only if 360 ID Tag remains attached.”

Duhs said that the tags form part of sellers’ return policies and is consistent with eBay’s policy of “Unused with tags still attached.”

What’s clever is the use of unique numbers on the seal. Duhs explains, “Even if the buyer has their own supply of the tags, there is a unique ID serial number on the tamper-evident security seals to ensure that it cannot be switched.” The idea is to record the tag number with the order information, so when an item is returned, you can make sure it’s the same exact item and tag that you sent to the customer.

There’s also a surprise waiting for the sneaky buyer who tries to remove the seal from the ribbon tag with the idea of reattaching it after use: the seal peels off but leaves some of itself behind, forming the word “VOID.” There’s no way to peel off a seal from the ribbon without leaving evidence of tampering behind on both the ribbon and the seal.

The box of tags comes with instructions for the merchant:

“Unlike other single use security tags it also does not need to pierce fabric with a pin, which could potentially result in damage to an item,” Duhs explained. And the synthetic polymer composite is fully recyclable, she said.

The seals are stickers that come separately on a sheet. Once you cut the “ribbon” tag to size and place it around an item, you remove a seal from the sheet and wrap it where the two ends of the looped tag meet. For example, you would loop the tag around a dress all the way from hem to collar and back to hem and then attach the two ends with the seal.

As the accompanying picture shows, it would be very noticeable if a buyer wore the item without removing the tag, and once they cut it, the merchant would know (if the buyer was brazen enough to return it).

The 360 ID Tags can be used by sellers on any platform, but Duhs explained why it’s particularly helpful for marketplace sellers.

“For eBay Top Rated Sellers who have to offer extended 30-day return windows in order to receive the benefits of that program – like the discount on final value fees, protecting their merchandise is of paramount importance,” she said. “Through my research I have also seen growing documented incidences of counterfeit returns where merchandise is switched for a fake and returned, which are not possible if the 360 ID Tag is used.”

While the tags may give merchants confidence that they will be able to reduce returns abuse, the tags aren’t meant to eliminate all returns. In fact, Duhs pointed out that the tags give buyers the freedom to try, inspect and contemplate their purchase in the comfort of their own home knowing they have the option to return if they just leave the 360 ID Tag on the item.

“This creates a smooth transaction that we all want from both the buyer and the seller’s perspective. As a seller, when we get returns, they are processed efficiently and expectedly without wondering why the dress smells of smoke or wondering if the manufacturer’s stylish safety pin tag has been slipped off and slipped back on!”

The tags aren’t just for clothing, nor are they meant only for new goods. “The 360 ID Tag also works perfectly for preloved merchandise that no longer has any tags,” Duhs said.

The Compact Loop Pack is ideal for items requiring less tag material such as handbags, button holes, and shoes. Other packs are available including an Extended Loop Pack (ideal for items such as wedding dresses). You can see the products and pricing on this page.

Duhs said the companies she works with – BrandWatch Technologies and a specialty paper manufacturer – are partners with her company in the venture, all with ownership of the intellectual property rights, and self-funded.

Duhs explains that the 360 ID Tag was born from a fear of exposure to return fraud and from a necessity to protect her business from brazen consumer behaviors like “use and return” or “counterfeit product switching.”

The store is set to launch this weekend at 360idtag.com.