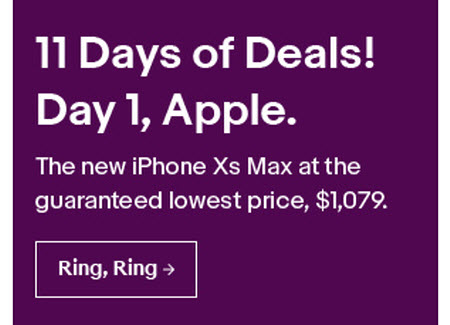 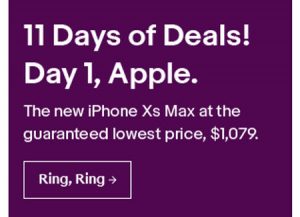 eBay kicked off its first holiday-shopping campaign today with “eleven days of holiday deals.” The campaign focuses on eBay Deals, a section of its site closed to the majority of third-party sellers and offering heavily discounted commodity goods in tech, home & garden, fashion, sporting goods, and automotive.

Each day at 5am PT from November 1- 11, eBay will unveil new, limited-time deals on eBay.com/Deals.

eBay is also kicking off new ads on TV and online with an “It’s Happening” theme. The company said, “The new ads reflect the vibrant personality of eBay’s marketplace, as well as eBay’s unmatched ability to offer shoppers everything that’s red-hot, timeless, retro and relevant this holiday season. From the major trends of the season to the most-coveted toys to one-of-a-kind gifts you can’t find anywhere else, the creative showcases how “If it’s happening this season, it’s happening on eBay.”

eBay marketing executive Suzy Deering stated in the press release, “eBay’s new holiday creative highlights the unique spirit and dynamic nature of the brand – from amazing deals on the hottest items to the super-special and nostalgic to one-of-a-kind gifts that give back. Our brand reflects what’s happening in the world and is a barometer for what’s trending right now. Whether it’s fashion, entertainment, tech or toys, inspiration is everywhere, and only eBay makes it instantly shoppable throughout the entire season.” ”

eBay is calling the 11-day deals campaign “First Minute” deals and said it would run deals throughout the holidays, including “Last Minute” deals with guaranteed delivery by Christmas

In its press release announcing the holiday shopping kickoff, eBay touted its Best Price Guarantee, which is only available on goods for sale on the eBay Deals site, and it noted, “Eligible items for Best Price Guarantee must be available from an approved competitor, including Amazon.com, BestBuy.com, HomeDepot.com, Jet.com, Sears.com, Target.com, Walmart.com, and Wayfair.com.”