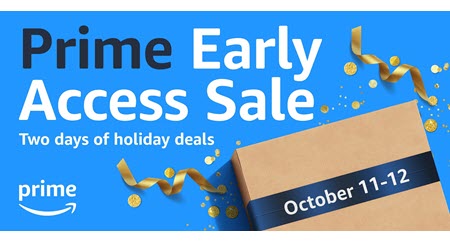 Amazon explained in a post on its Seller Announcement board on Friday: “As part of the event, we’re making it easier for Prime members to discover, shop, and save on your deals. New deals will drop throughout the event, allowing you to showcase products across all top categories, including electronics, fashion, home, kitchen, pets, and toys.”

When a seller replied to Friday’s invitation saying a week’s notice was not enough time for sellers to take advantage of the holiday-shopping event, an Amazon moderator said the event had been announced on June 1st in Seller Central where Deal submissions on recommended ASINs were open through August 5th.

In its announcement on Friday, Amazon told sellers that to participate in the Prime Early Access Sale, they should submit a Prime Exclusive Discount or Coupon before October 11, 2022. Friday’s invitation is available in a post on Amazon Seller Central. Let us know if you think Amazon gave sellers enough time to participate in a meaningful way.