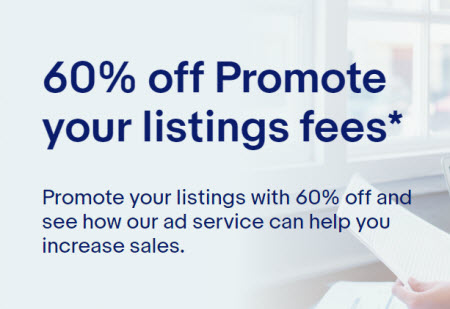 eBay is discounting Promoted Listings to entice sellers to advertise. The promotion invites sellers to try Promoted Listing ads at 60% off (up to $1,000) and is valid through February 15, 2019. With Promoted Listings, sellers pay advertising fees only when the ad results in a sale; the seller sets the fee as a percentage of the selling price ahead of time.

The following is an excerpt of the terms of the promotion, which sellers should read fully and carefully on this page:

Sellers considering advertising through the program should be aware that Promoted Listings ads may preempt the same listing from appearing organically in the same set of results, and a listing’s organic ranking may be impacted by its performance in Promoted Listings.

As we reported yesterday, eBay CEO Devin Wenig revealed plans to add a CPC model to the Promoted Listing ad lineup. A seller who received the invitation to participate in the current promotion told us he believed it signaled eBay’s desperation to get sellers to use Promoted Listings. Let us know what you think on the EcommerceBytes Blog post.