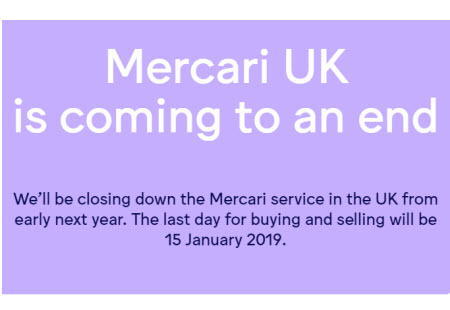 Mercari shocked sellers today when it announced it will exit the UK market in January. The company said the selling app would continue to be available in the US and in Japan, where the company is based.

Consumers and sellers alike have been expanding beyond the traditional marketplaces to sell their “stuff,” and Mercari has become a popular alternative to eBay, Etsy, and Amazon.

Mercari was created in 2013 by Shintaro Yamada. When it launched in the UK on March 15, 2017, it boasted that its mobile app had over 60 million downloads globally and, “With a 5th investment round of $75 million last year Mercari is set for fast growth and ready to challenge industry giants like eBay in becoming market leader for community-led shopping, connecting buyers and sellers.”

Its US website currently states it has over 35 million downloads in the US and reaches 100,000 new listings every day. We’ve sent an inquiry to Mercari to learn more and get current adoption rates.

On some social media sites, UK buyers and sellers expressed disappointment that they would lose access to the platform. Some users wondered if Brexit, which is the UK’s plan to exit the European Union, may have played a role.

Nikkei also noted that while Mercari has recruited executives from American tech firms, the US business “is also bleeding red ink in the face of stiff competition.”

Here are some key dates for UK users to note:

January 15, 2019: “We’ll be ending all buying and selling, and restricting access to most features. Please take copies of any information you need for your records from within the app before this date. You will still be able to complete outstanding transactions, request a withdrawal, and get support from our team.”

March 15, 2019: Please make sure you’ve withdrawn your balance, as all functionality in the app will no longer work.”

Users who need help once the app becomes unavailable in mid-March should email
uk-contact@mercari.com.

You can learn more on the Mercari UK website.