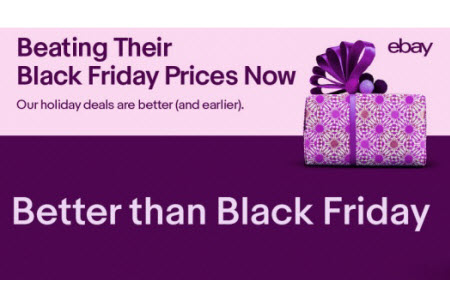 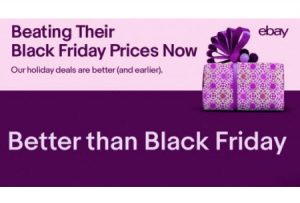 eBay launched “Better than Black Friday” deals today in which it promises to match or beat the deals advertised in retailers’ Black Friday circulars that have already been made public, but won’t be available until next week.

Most items from third-party sellers are excluded from the promotion, which is held on its eBay Deals site, not the eBay Marketplace.

eBay is rolling out “Better than Black Friday” deals November 12 and will make deals available through November 18.

eBay took the opportunity in its announcement to also promote its Best Price Guarantee (available only on its Deals site) and its “Fast, Free, Guaranteed Delivery” guarantee, which is available on more than 100 million listings.

“Pouring over Black Friday ads has become a pre-Thanksgiving pastime for many US shoppers. We scoured these same ads so we could beat or match the best deals a week early on eBay,” said Jay Hanson, Chief Operating Officer of eBay Americas. “Black Friday is all about the amazing deal that can’t be found anywhere else, except now you can. eBay customers will have advanced access to some of the lowest prices this season right now.”

You can find the deals on eBay.com/BetterBlackFriday.