eBay launched a calculator to help sellers determine how much they could save using managed payments. While eBay chooses to focus on cost savings – which can be significant – sellers must also weigh other factors, including the impact that not offering PayPal to shoppers might have.

eBay mentioned the calculator in a post updating sellers in which it said sales for the initial sellers in managed payments are “going well” and said some are actually seeing increased sales velocity compared to their sales prior to signing up. It’s not an apples-to-apples comparison, however – eBay didn’t say how much of increase was due to a seasonal boost. Typically retailers use year-over-year comparisons when measuring sales growth to account for seasonality rather than sequential comparisons.

eBay began rolling out managed payments on September 24, 2018 to an invitation-only group of sellers, and the company said today it was seeing positive results for both its own business and for sellers.

“Since introducing managed payments on a small scale in the U.S. 21 days ago, we’ve already intermediated more than $20 million in GMV – tracking at an annualized run rate of nearly half a billion dollars.”

Sellers are benefiting from reduced costs, which represents $175,000 in seller savings to date, which translates to almost $4 million in seller savings on an annual basis. Note that eBay didn’t calculate the exact cost savings for participants in managed payments – in a confusing statement, it wrote:

“Based on a July 2018 eBay study of provider rates among leading competitors as they would apply to the average selling price of the invited seller population in the past 90 days, comparing flat rates charged for online processing only and excluding any applicable monthly fees. We encourage sellers to calculate how these fees will affect their own selling costs.”

eBay also revealed that, of those using their Apple mobile devices to purchase an item through managed payments, 10% chose to use Apple Pay. That sounds low, but it’s not bad considering that Apple Pay is largely used offline in the physical store or transit, according to experts.

Updates from eBay about managed payments are welcome, but it would do well to provide more information – not just for skeptics, but for business owners who must weigh the pros and cons of a program that could have a tremendous impact on their bottom line.

Is eBay giving sellers who participate in managed payments increased exposure in search results? And are there other factors at play that may be giving those sellers an added advantage? If so, how long can participants in managed payments expect to have that advantage, and will it dissipate as more sellers join the program?

Are sellers having better success with items in some categories than in others?

(Note that you should take your average selling price and add in Shipping & Handling and sales tax, since the processing fee is on the full transaction amount.)

Then hit the calculate button.
For a $25 “average selling price,” the calculator determines a seller would save 35 cents.

The next step is to multiply that number by the average number of transactions – eBay’s calculator doesn’t have a field for that. So for example, if you do 100 transactions in a week, or a month, you would multiple 35 cents times 100 and discover you would be saving $35 using eBay managed payments.

That truly is significant, making it a shame that eBay rolled out managed payments in its half-baked state. Because what the calculator can’t determine is whether the 100 sales you expect would be impacted by the fact your buyers can not pay you with PayPal.

You can find the calculator on this page. 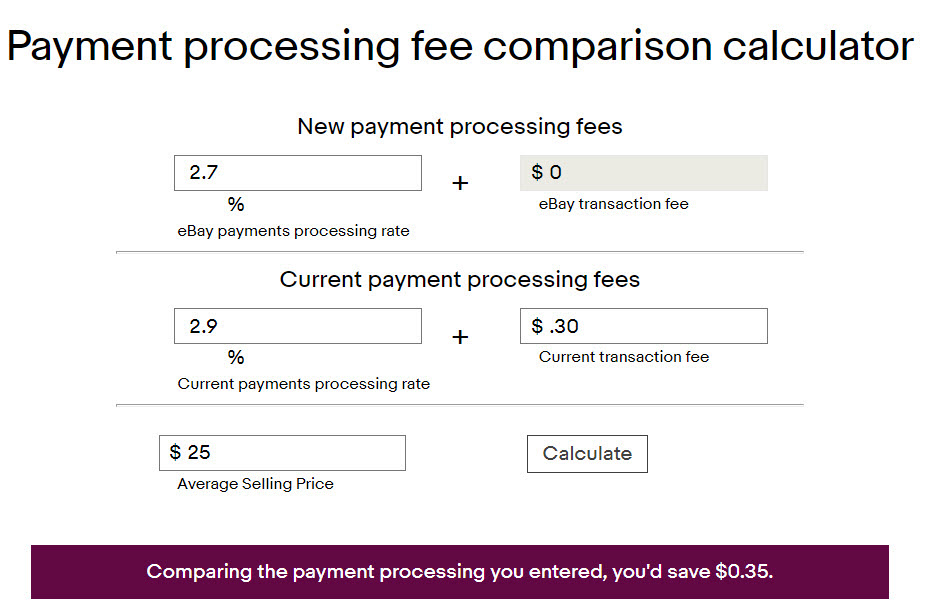