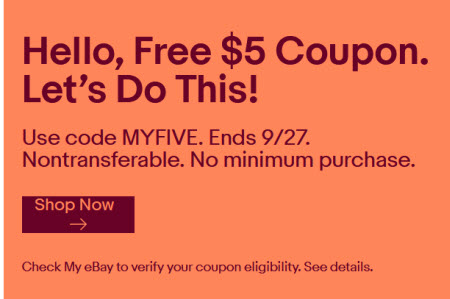 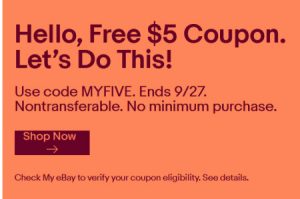 eBay is offering a $5 coupon this month as part of an invitation-only promotion. It kicked off on September 5th and runs through September 27th.

Some buyers who received the invitation to participate reported having problems with redeeming the coupon. “The MYFIVE coupon does not work for me. What do you do if a coupon code does not work,” one user asked on the eBay discussion boards on September 7th.

“My MYFIVE coupon code will not work,” wrote another on the following day.

Neither report of a problem with redemption received a response from eBay moderators in the threads.

This month’s MYFIVE coupon is a repeat of a promotion it held in July in which some invitees also reported having difficulties redeeming the coupon, as we reported in Newsflash.

No minimum purchase is required to redeem the MYFIVE coupon, and per usual, exclusions include warranties and protection plans, as well as items from the Coins & Paper Money, Gift Cards & Coupons, and Real Estate categories. Be sure to see the invitation for details and restrictions (link to landing page).