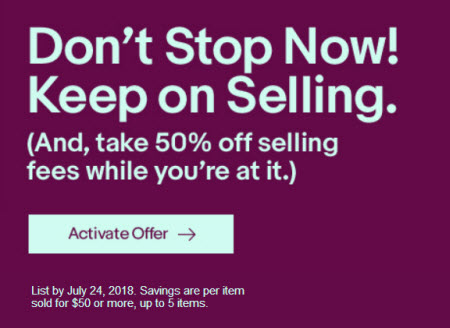 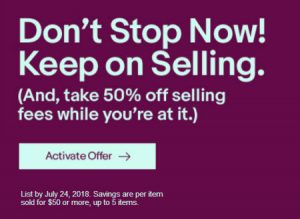 eBay is running a promotion to encourage sellers to list items priced at $50 or more. The invitation-only promotion for US sellers kicked off on July 20th and runs through July 24th. eBay also mentioned its marketing campaign in the invitation to sellers.

The promotion applies to auction, fixed-price, and Good Til Cancelled listings of any duration. Invited sellers who activate the promotion will receive a 50% discount on Final Value Fees for the first 5 items sold for $50 or more.

eBay also revealed that it had been favoring higher ASP branded items in search results.

In inviting sellers to participate in the latest promotion, eBay told sellers it was sending buyers their way:

“Our colorful new campaign is everywhere! Buyers won’t be able to miss our “Did You Check eBay?” messaging on TV, radio, billboards, social media, and more. List now for maximum exposure!”

Read the invitation carefully for details and restrictions.