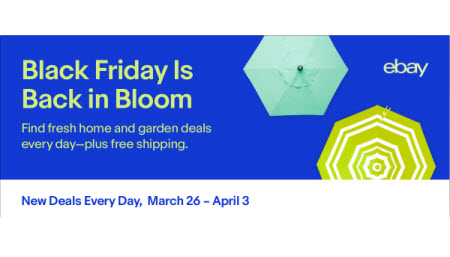 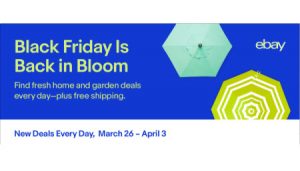 eBay is running a “Spring Black Friday” sale through its eBay Deals platform, which is separate from regular marketplace listings. eBay explained last year that only 900 of eBay’s “most trusted sellers” participate in the eBay Deals platform, which it said ranged from major consumer brands to smaller merchants looking to broaden their customer base.

That means most sellers will not benefit directly from the sale, though some sellers could see a bump in traffic from the marketing campaign.

For regular merchants, it’s tough to compete with eBay Deals, which are similar to “first-party” sales; eBay all but purchases the items from the supplier. Here’s eBay’s post about its seven-day “Spring Black Friday” sale on deals.

Spring is officially back in bloom – and along with it a subtle reminder of the home improvement projects we may have put off last year. In recent years, early Spring has proven to be a valuable time for shoppers to take advantage of special pricing on top home & garden items from high-powered grills to new outdoor furniture. Offering a new twist on the excitement of ‘Black Friday,’ today, eBay is launching seven days of limited-time spring deals on seasonal essentials from top brands like Apple, Dyson and Char-Broil via Daily Deals (eBay.com/Deals).

Timed perfectly for those shoppers already dreaming of backyard barbecues and home improvements, the marketplace’s ‘Spring Black Friday’ deals will offer the best prices on amazing inventory from patio and garden essentials to the latest smart-home gadgets. In fact, with tax season upon us, a recent eBay study of 1,000 Americans found that nearly a third (27%) of those expecting to spend their tax refund planned to use it to invest in their home. *

“For those looking to refresh their space for the season, we’re providing amazing value and selection that only eBay can offer,” said Alyssa Steele, Vice President of Merchandising at eBay. “Our shoppers can expect fast and free shipping on each of these ‘Spring Black Friday’ deals, whether they’re planning for a patio makeover, starting a new garden or gearing up for warm weather entertaining.”

A new deal will go live daily on eBay.com/Deals and all include free shipping, with no membership required.