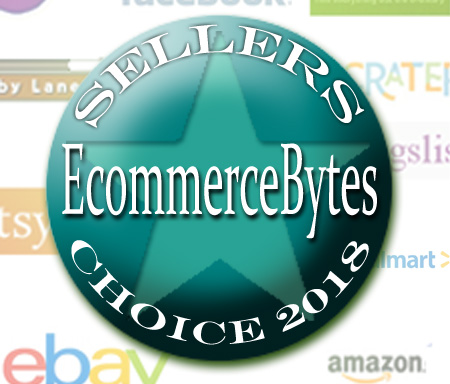 Over 10,000 sellers participated in the 9th annual Sellers Choice Awards. In the initial nomination process, EcommerceBytes readers chose 10 finalists. Readers then rated the finalists in four key areas – profitability, customer service, communication and ease of use. Respondents were also asked how likely they were to recommend each marketplace as a selling venue to a friend or colleague.

In addition to rating each of the marketplaces on which they sold, sellers also provided comments that shed light on the joys and pitfalls of each venue – the kind of inside information you won’t find anyplace else. This annual process gives both merchants and site owners alike an unfiltered glimpse into what each marketplace is doing right, and what they could be doing better.

At number two, eBay earned the top spot in Profitability for the fifth straight year. At number three, Etsy earned top spot for Ease of Use. And at number four, Ruby Lane won for “Best Customer Service.” Ruby Lane also took first place when it came to Top Recommended marketplace.

Bonanza came in fifth place overall and earned the distinction for “Best Communication” for the fifth straight year.

Walmart was a finalist for the first time this year, supplanting Pinterest, though it took last the spot at number 10. We wondered about other marketplaces that were nominated but didn’t garner enough votes to make it into the top 10, you can read what sellers had to say on the AuctionBytes Blog (“As Top 10 Marketplaces Voting Begins, What About the Others?“).

Two additional points of interest: the same five marketplaces have topped the list since 2012; and most marketplaces showed some slight improvements in ratings this year over last year.

We dig into this year’s results below, but first a breakdown of each criterion.

How It Breaks Down – Profitability
We asked sellers, “How would you rate your profitability as a seller on (marketplace name)?” eBay topped the list for Profitability, followed by Etsy, Amazon, Ruby Lane, and Craigslist. 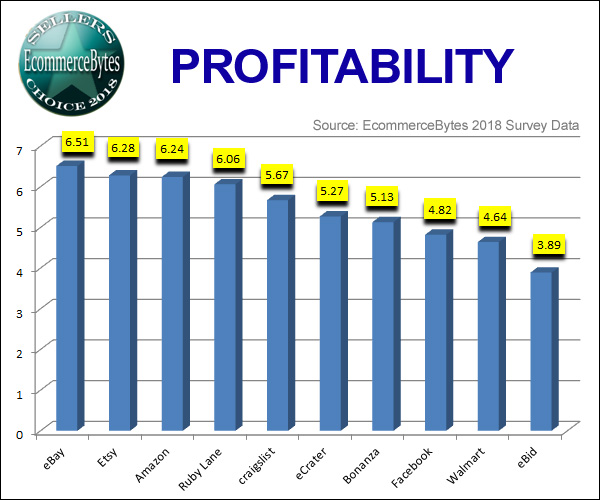 How It Breaks Down – Customer Service
We asked sellers, “How would you rate the customer service (marketplace name) provides to sellers?” Ruby Lane topped the list for Customer Service again this year. It was followed by Amazon, Bonanza, Etsy, and eBay. 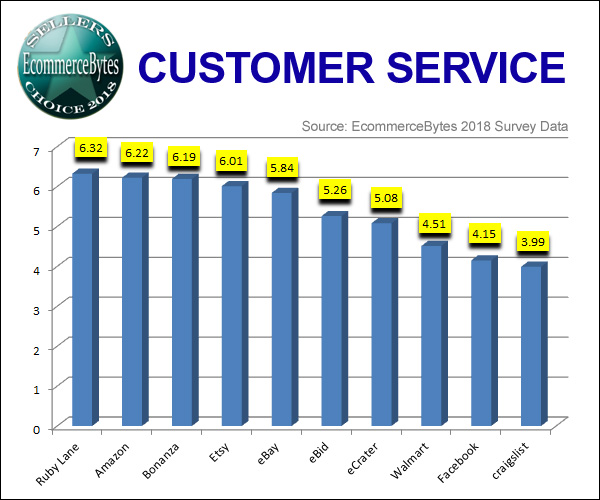 How It Breaks Down – Communication
We asked sellers, “How would you rate (marketplace name)’s communication with you as a seller?” Bonanza topped the list for Communication again this year, followed by Amazon, Ruby Lane, Etsy, and eBay. 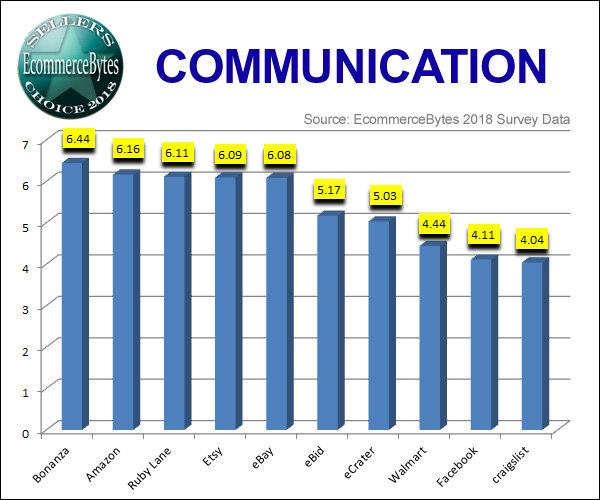 How It Breaks Down – Ease of Use
We asked sellers, “How would you rate (marketplace name)’s ease of use as a seller?” Etsy topped the list for Ease of Use again this year, followed by Amazon, eBay, Craigslist, and Bonanza. 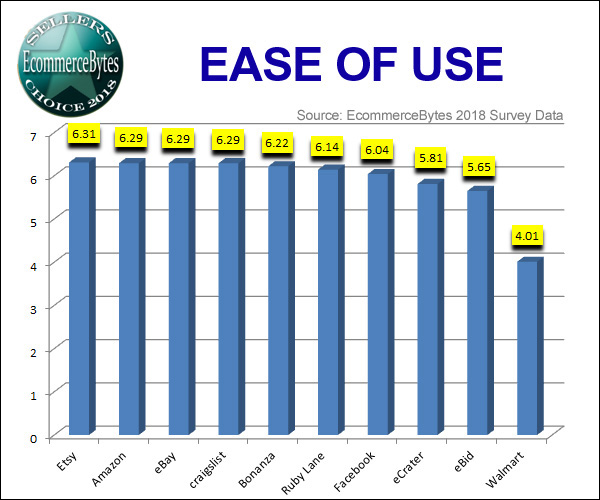 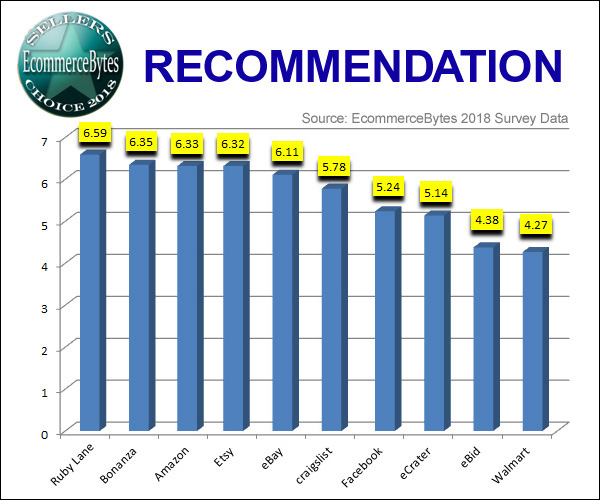 Digging In to This Year’s Results
Selling on marketplaces is highly competitive, and this led to some complaints from sellers across multiple marketplaces in this year’s Sellers Choice Awards, particularly around exposure in search results; difficulty in competing with high-volume sellers; and programs marketplaces have created to allow sellers to pay for greater exposure in search and other areas of the site.

Many participants in this year’s Sellers Choice indicated the size of a seller should not impact search results, nor should the size of their wallet. Yet many sellers believe marketplaces take other factors into account rather than ranking listings strictly according to how well they match shoppers’ keyword searches.

All of the top-five marketplaces have advertising programs for sellers, something less common in the early days of ecommerce when sellers believed paying listing fees was, in effect, paying for advertising. These programs, some going by the name “Promoted Listings,” presents both opportunities and challenges, and margins often play a role in sellers’ willingness to participate.

Also gone is the concept of a level playing field, many indicated. Marketplaces make no secret of working to attract brands and high-volume merchants and offering them preferential treatment, something that continues to irk some smaller sellers who fight to get their listings in front of shopper eyeballs.

In light of the competition they face, many sellers wish to see marketplaces do more advertising themselves in order to bring more traffic – this was true not only sellers on smaller sites, but those on larger marketplaces as well.

Sellers expressed concerns about fees and the pressure to lower prices, directly impacting their margins. Others fear marketplaces are cluttering their sites with too many ads. Seller protection and seller policies were also cited as areas of concern.

The online sales tax issue reared its ugly head in this year’s Sellers Choice awards. Sellers are being told by some states that they must collect and remit sales tax on purchases made to their residents, even micro sellers with no physical presence in those states.

A seller who sells handmade goods on Amazon Handmade noted in her survey comments she was nervous about using Amazon FBA because of uncertainty around sales-tax obligations. “When I look at a state’s web site about nexus, it APPEARS that using an Amazon fulfillment center DOES qualify as Nexus. Then I hear that the Quill court decision overrules anything the states might try to pull off. And that sort of makes sense too. But until I feel more comfortable with all that, I will continue to fulfill my own orders.” But she wondered if that’s why her sales were so low on the site. “I’m told this may be why my sales are soooo slow. I’ve had between 25 and 50-ish Handmade listings on Amazon over the last year,” she said.

How the issue is resolved could have big implications for marketplaces. As the comment above demonstrates, uncertainty around sales tax is influencing seller behavior, and it will be interesting to see how things shake out by next year’s Sellers Choice survey.

Comments: Insider Information
Each year, sellers share comments about the marketplaces that provide a picture of what it’s like to sell on these online marketplaces.

What’s striking about reviewing the Sellers Choice comments is how many different kinds of sellers there are, and how different their experiences can be on various marketplaces. There’s sometimes the “grass is always greener” phenomenon going on, with small sellers believing things are easier for large sellers. What’s clear from reading the comments is that all sellers face challenges, and they can differ depending not only on the size of their business, but on whether they’re selling household goods, guitar straps, antiques, rare and collectible books, or DVDs.

With thousands of responses, it’s impossible to include every comment each marketplace received, but we include the most representative comments and the ones most interesting or useful to readers. Note that the number of comments left for a marketplace doesn’t necessarily indicate its placement in the rankings.

Comments are included on the individual marketplace rating pages (links can be found at the bottom of the page).

Individual Online Marketplace Ratings
You can find each marketplace with the results of the Sellers Choice survey on the following pages.