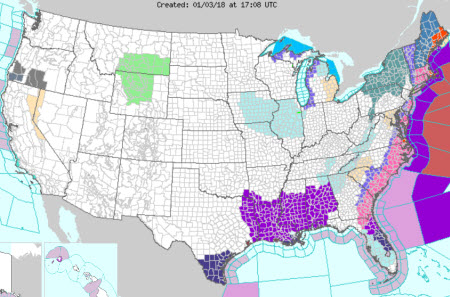 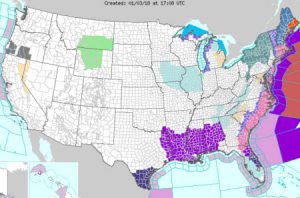 The Northeast United States is used to snow storms and blizzards, but the one arriving on Thursday looks to be a record-breaker, and it is impacting the entire east coast beginning today. Here is the warning from the National Weather Service:

The Washington Post has an interesting article – the title shows the seriousness of the storm: “”Bomb cyclone” to blast East Coast before polar vortex uncorks tremendous cold late this week.”

It could take time for the East Coast to dig out, with power outages likely and with frigid air arriving after the storm.

If you’re a seller in the regions affected, start preparing now, and if you’re shipping to the East Coast, communicate with customers as early as possible to warn them of possible delays.

Update 1/3/18: At least 12 people in the US have died this week in cold-related deaths, according to news reports, and the storm that is making its way up the East Coast is bringing with it serious conditions including coastal flooding and icy roads in areas where cities and towns aren’t geared up for such conditions. We’re expecting a high of 10 degrees on Friday and a high of 3 degrees on Saturday in the Boston area, so power outages due to Thursday’s storm could be devastating for those impacted.

Regarding shipping disruptions – since posting the article above:

– The USPS warned “some Post Office locations have temporarily suspended operations” on its alert page.

– FedEx announced “the winter storm is causing hazardous conditions across the Eastern region of the U.S.,… Although contingency plans are in place, some service delays and disruptions can be anticipated for inbound and outbound shipments in FL, GA, NC and SC.”

– And UPS said “Severe winter weather is impacting service in areas of Georgia and South Carolina, where there will be no pickups or deliveries.”

Normally you only have to worry about customers in Florida during hurricane season, but be aware that it residents of that state saw snow today, some for the first time.

One thought on “Expect Shipping Disruptions from East Coast Storm”