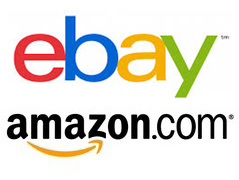 Amazon and eBay have made similar changes to their advertising programs for third-parties. EcommerceBytes checked in with Merkle to learn more about the approaches of the two marketplaces. Andy Taylor, Merkle’s Associate Director of Research, also discussed his firm’s recently published Q3 2017 Digital Marketing Report.

Despite their different business models, eBay and Amazon both made similar advertising changes. Those changes made certain classes of display advertising favor retaining viewers on their respective sites, with varied approaches on accomplishing this.

“These ad units are still in the early stages of adoption and thus I don’t have confident predictions for which will account for more spend share during the holidays given how close they are in spend share at the moment,” Taylor said of HSA and PDA. “The one thing we do confidently expect is that Sponsored Products spend will far outweigh them both.”

Meanwhile eBay wants eyeballs staying on their virtual real estate. The auction site’s play for this involves addition by subtraction, as eBay reduced the role of product display ads.

“At this point there have been no new ad formats released to replace product ads directly on eBay.com, but the move to eliminate them echoes one by Amazon in 2015 to remove ad units from its site which take users off its domain and to a retailer site,” Taylor said.

“If eBay were to continue replicating Amazon’s strategy, they might try to roll out ad units similar to those Amazon features which keep users on eBay.com.”

Any look at advertising and the swiftly arriving holiday shopping season would be remiss without considering Google. Advertisers understand their audiences search for product information in various places, with eBay, Amazon, and Google all having pieces of that activity.

Regarding ad spending on “non-brands” on Google, Taylor noted, “Non-brand minimum bid estimates have held fairly steady since June so we expect that the May ad rank changes will not continue to drive increases relative to what we see now.”

Taylor also said, “Minimum bid estimates have gone up during the holidays in the past as a result of greater competition during the busy shopping season relative to the rest of the year, and that will likely be the case to some extent again in 2017.”

Some callouts from the report:

– eBay Commerce Network Spend Share Continues to Decline: eBay accounted for 54% of all US CSE (comparison shopping engine) spend in Q3 2017, a significant decline from the 66% share that its network accounted for a year earlier. While eBay Commerce Network (ECN) share has been in steady decline since last Q4, Q3 saw the biggest quarter-to-quarter drop in spend share as product ads were removed from ebay.com entirely in May.

– eBay Commerce Network CPC Decline Quickens: While ECN CPC (cost per click) has been declining Y/Y for all of 2017 so far, the pace quickened in Q3 with a 54% Y/Y decline compared to a decrease of 31% in Q2. With eBay’s decision to eliminate product ads from showing directly on ebay.com, the network lost some of its best performing traffic, resulting in ECN traffic producing lower value for advertisers and necessitating lower cost per click.

– Facebook: News Feed ads accounted for 84% of Facebook spend in Q3, far outpacing the second-largest source of spend, the right-hand rail, which accounted for 6%.