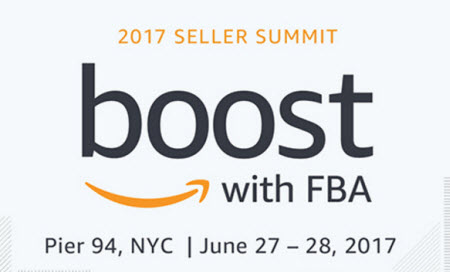 Amazon is hosting its first Boost with FBA Summit for sellers enrolled in its Fulfillment by Amazon service. Attendees are meeting with Amazon experts on how to grow sales and sell in new marketplaces, and 1,000 participants were expected to attend.

Amazon today held Boost with FBA, a first-ever summit in the U.S. for small business and entrepreneurs participating in the Fulfillment by Amazon (FBA) service. The inaugural event, held in New York City, brought together over 1,000 entrepreneurs and small business owners to meet with Amazon leaders face-to-face and learn about the tools and services that can help them further grow their business on Amazon. With access to more than 300 million active customer accounts worldwide, Amazon provides small businesses the opportunity to quickly reach customers in their neighborhood and around the globe.

“Small businesses are thriving on Amazon and we’re thrilled to bring these entrepreneurs together to help them take their business to the next level,” said Cynthia Williams, Vice President for Fulfillment by Amazon. “Entrepreneurs on Amazon are expanding their businesses worldwide and increasingly using the logistical expertise of the FBA service to reach new customers in Europe and Asia.”

FBA enables sellers to attract Prime members by having Amazon store and ship their products directly to customers while offering Prime benefits, including FREE two-day or same-day shipping and simple exporting around the world. At Boost with FBA, sellers met with Amazon experts to learn about how they can sharpen their business strategies, grow their sales, reach new customers and sell in new marketplaces. They also heard from seasoned sellers and fellow small business owners.

Facts about Fulfillment by Amazon:

– In 2016, Fulfillment by Amazon delivered more than 2 billion items on behalf of small business and entrepreneurs.

“FBA is a terrific fit for us. We don’t have the warehouses or shipping capacity to fulfill direct-to-consumer orders, and it means I can focus on listening to customer feedback and refining my designs,” said Lawrence Bibi, CEO of LightAccents. Based in Paramus, NJ, Bibi has leveraged FBA since 2011 and in 2016 expanded sales of his light fixtures and home décor into Italy, France and Germany. “FBA allows us to keep our profits and sell across the world.”

“The performance of our products on FBA has really surpassed anything I could have ever imagined,” said Caron Proschan, founder and CEO of Simply Gum, a New York-based company selling all-natural gum. “FBA lets us focus on more strategic questions of marketing and growing our business, knowing that fulfillment is well taken care of.”

Half of the items sold on Amazon worldwide are from sellers that offer their products through Amazon Marketplace. Small businesses and entrepreneurs selling on Amazon come from every state in the U.S., and from more than 130 different countries around the world. Amazon began inviting small businesses to sell on Amazon to increase selection and ensure customers could find and discover anything they wanted to buy online.