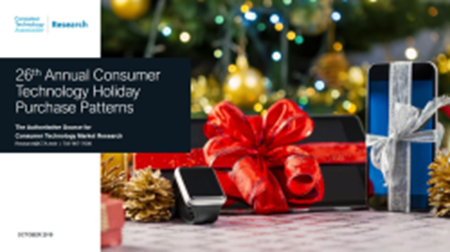 It’s ironic that the top channel for shopping for tech products is brick-and-mortar stores, but that’s the finding from a new report from the Consumer Technology Association (CTA).

The CTA’s 26th Annual Consumer Technology Holiday Purchase Patterns study says technology spending during the 2019 holiday season (October-December) is projected to reach $97.1 billion in revenue in the US, on par with last year’s actual spending.

Seven-in-ten U.S. adults (71%) plan to purchase a content-related gift this year, which includes videogame discs (43%) and streaming or download entertainment services such as Netflix or Hulu (39%).

“We are in the golden age of content as more people consume more content across more devices,” said Lesley Rohrbaugh, director of market research, CTA. “New video streaming services, more 4K Ultra HD content and larger screens on TVs and smartphones are putting entertainment on gift lists this holiday. Screens like laptops, smartphones and TVs will top wish lists and we’ll see a rise in emerging tech categories like smart home devices and wearables too.”

Top Five Tech Gifts Consumers Most Want to Get

The ‘Three Screens’ continue to top consumer wish lists this year, with desktops and digital cameras falling off the top five list.

This season, more consumers plan to buy emerging tech as gifts for others, as well as themselves.

Another popular gift this year will be videogame products, with half (50%) of U.S. adults planning to purchase a gift in this category. One-third (33%) plan to buy a videogame console such as an Xbox One X or PlayStation 4 Pro and accessories such as steering wheels or joysticks.

Brick-and-Mortar is the Top Channel for Tech Shopping

Overall, 87% of U.S. adult consumers plan to shop at brick-and-mortar stores for tech gifts this holiday season, and 80% plan to shop online – both up over last year. Of those shopping online, 65% plan to do so using a mobile device (e.g., smartphone or tablet) and 33% plan to shop using a voice-activated digital assistant.

To keep up to date with all of CTA’s holiday and Black Friday research throughout the season, visit CTA.tech/holiday, where the report is available at no cost for CTA members.

See trends in next-gen screen technology, content and retail play out at CES 2020.

As North America’s largest technology trade association, CTA® is the tech sector. Our members are the world’s leading innovators – from startups to global brands – helping support more than 18 million American jobs. CTA owns and produces CES® – the largest, most influential tech event on the planet. Find us at CTA.tech. Follow us @CTAtech.