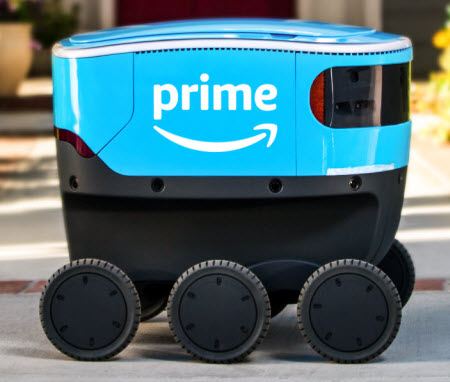 Amazon robots, with the non-threatening name of “Scouts,” are patrolling the streets delivering packages in Snohomish, Washington as part of a test. Amazon explains the Scout is an “autonomous delivery device” the size of a small cooler, on wheels.

“We’re starting with six Amazon Scout devices, delivering packages Monday through Friday, during daylight hours. The devices will autonomously follow their delivery route but will initially be accompanied by an Amazon employee. We developed Amazon Scout at our research and development lab in Seattle, ensuring the devices can safely and efficiently navigate around pets, pedestrians and anything else in their path.”

So how does delivery by Amazon Scout work? “Customers in Snohomish County order just as they normally would and their Amazon packages will be delivered either by one of our trusted partner carriers or by Amazon Scout. Customers can shop on the Amazon App or amazon.com and enjoy the same delivery options including fast, FREE Same-Day, One-Day and Two-Day shipping for Prime members.”

The name is a little confusing, since a few months ago, Amazon was testing a shopping service called Scout that helped shoppers find items based on their preferences.

Amazon provided a statement to CNBC about Scout back in September, stating in part: “This is a new way to shop, allowing customers to browse millions of items and quickly refine the selection based solely on visual attributes. It is perfect for shoppers who face two common dilemmas: “I don’t know what I want, but I’ll know it when I see it” and “I know what I want, but I don’t know what it’s called.”” We’re not sure what happened to that Scout – The Amazon.com/scout URL now sends visitors to the blog post announcing the Scout delivery robot.

Corporations’ use of robots got some attention last week when the New York Times published an article about executives’ discussions about Artificial Intelligence and automation at the World Economic Forum in Davos.

“They’ll never admit it in public, but many of your bosses want machines to replace you as soon as possible,” was the opening line.

Amazon seems among the best positioned to do that, having acquired Kiva in 2012 and increasingly deploying robotics in its warehouses.

4 thoughts on “Amazon Robots Are Delivering Packages in Snohomish”