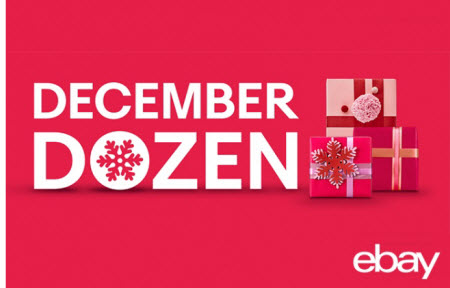 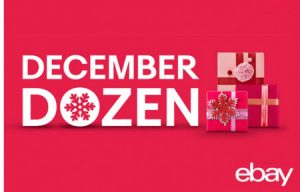 eBay said “Green Monday” – the second Monday of December – is historically one of its busiest holiday shopping days, and it will launch Green Monday deals on December 10th. “Offering last-minute shoppers the best deals since Cyber Week, new deals will launch every hour from 6am PT – 6pm PT,” it announced.

eBay also launched a marketing campaign today called the “December Dozen” deals. For 12 days, it will highlight discounts available through its Daily Deals and Sales and Events.

“Featuring the best discounts since cyber week, the ‘December Dozen’ celebrates 12 days of discounts on the gifts trending this season.”

Today, eBay – the world’s most dynamic marketplace – launches the ‘December Dozen,’ 12 days of unbelievable discounts on the hottest products and trending gifts of the season. Everyday eBay will reveal a new offer on eBay.com through December 16. With thousands of deals, shoppers can discover massive sales and surprise savings, and every deal ships free. Additionally, as part of the ‘December Dozen,’ new deals will be released every hour for ‘Green Monday’ on December 10, with one of the biggest one-day sale events since Cyber Week.

“We’ve seen a number of hot holiday items emerge this season and plan to feature them at amazing prices over the next 12 days in our ‘December Dozen,’” said Scott Cutler, Senior Vice President of eBay Americas. “We’re offering unbelievable deals with free shipping on the most popular gifts just in time for the holidays.”

During the ‘December Dozen’ shoppers will have access to unbeatable prices on thousands of the most sought-after items of the season. Daily released deals include:

SAVE BIG ON ‘GREEN MONDAY’

On Monday, December 10, eBay will launch big December discounts in celebration of ‘Green Monday,’ historically one of the company’s busiest holiday shopping days. Beginning at 5am PT, shoppers can take advantage of amazing prices on electronics, home, fashion and more. Offering last-minute shoppers the best deals since Cyber Week, new deals will launch every hour from 6am PT – 6pm PT.

Created over a decade ago, ‘Green Monday’ was created by eBay in 2007, when the marketplace experienced one of its biggest sales days on the second Monday of December. In honor of the milestone, eBay named the day ‘Green Monday,’ a term that has since been widely adopted across the retail industry. Whether shoppers are logging on after the weekend, waiting for great last-minute deals or simply procrastinating, ‘Green Monday’ continues to be a big online shopping day and has consistently ranked as one of eBay’s top five sales days of the year. In fact, in 2017 it ranked as eBay’s third-highest sales day during the holidays.

“‘Green Monday’ has historically been one of the biggest shopping days of the year for eBay,” said Cutler. “We know holiday shoppers are looking for great savings on the hottest 2018 gifts and have a sense of urgency to complete their holiday shopping. On eBay, we guarantee the best prices with our Best Price Guarantee program and are fulfilling last-minute orders with Guaranteed Delivery.”

Some of eBay’s highlighted ‘Green Monday’ deals include:

This year, eBay will surface millions more items late into the holiday season. eBay’s Guaranteed Delivery is available on more than 100 million listings, ensuring they arrive in three days or less. Even better, millions of these items ship for free. In addition, holiday shoppers are guaranteed the best prices of the season with the Best Price Guarantee program, which beats the price on 150,000 deals, as eBay offers 110% of the price difference of eligible2 competitors’ prices.

To discover eBay’s ‘December Dozen’ deals and shop all of eBay’s deals, visit eBay.com and follow @eBay on social.