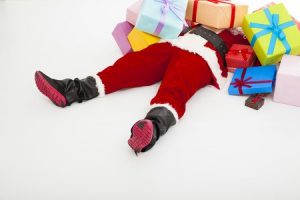 If it felt like holiday shopping started well before Thanksgiving weekend, you’re not wrong. Data from Salesforce shows retailers launched their best deals well in advance of Black Friday, with digital discount rates holding steady at 27% on Thanksgiving Day and Black Friday year-over-year.

“Retailers started announcing Black Friday deals in early November, and it appears to be paying off as online traffic saw a significant and steady bump all throughout the days leading up to Thanksgiving. A cold spell in the northeast also likely prompted some shoppers to check off their list online, but as temperatures warm up, expect more traffic to physical stores,” according to Verizon’s Michele Dupré.

Holiday Spending Thus Far
Adobe predicted consumers would spend $43 billion from November 1 – 23 this year, compared to $37.1 billion in 2017. It found actual spending came in higher than predicted for that time period, at $44.2 billion.

Thanksgiving Day Dessert with a Side of Mobile Shopping
Salesforce said shoppers broke out their phones right after leaving the Thanksgiving Day dinner table, with mobile usage ramping up after 4 pm and peaking between 8 pm and 10 pm, local time. It found visits from mobile represented 68% of all digital traffic this Thanksgiving, up from 62% last year

Black Friday Shopping in Physical Stores
The notion that Black Friday is no longer popular is a myth, according to retail consultant ShopperTrak, which released its preliminary shopper visit data for brick-and-mortar retail stores and shopping centers.

“Shopping in physical stores during the holidays continues to be an exciting annual event for consumers and based on the Black Friday traffic data, retailers are in for a successful holiday season,” according to ShopperTrak’s Brian Field.

Busiest Holiday-Shopping Days Lie Ahead
ShopperTrak said 8 of the 10 busiest shopping days (for brick-and-mortar stores) are still to come, including Super Saturday, which will fall on Dec. 22, and the Sunday before Christmas, Dec. 23.

Notably, for the third year in a row, there are four Saturdays in December prior to Christmas Day, which will enhance the importance of both Dec. 8 and Dec. 15.

In addition, similar to last year, the Saturday after Christmas, Dec. 29, is expected to be one of the busiest shopping days taking the last spot on the top 10 busiest day’s list.

EcommerceBytes will continue to report on holiday shopping data throughout the season. Here’s to a prosperous Cyber Monday.