Over 164 million consumers plan to shop over five-day Thanksgiving weekend, according to the National Retail Federation (NRF), which surveyed 7,516 consumers.

Black Friday will be the busiest day with 71 percent of consumers planning to shop. On Cyber Monday, 46 percent plan to take advantage of online bargains. And while Thanksgiving Day is traditionally a day of eating, football, and rest for Americans, 21 percent will be shopping.

“Compared to older generations, younger consumers under the age of 35 are more likely to be attracted by the social aspects of shopping over the weekend or by the fact that it is a family tradition,” according to Phil Rist of Prosper Insights & Analytics, which conducted the survey with the NRF.

Retailers are preparing for one of their biggest weekends of the year as an estimated 164 million people are already planning to go shopping Thanksgiving Day through Cyber Monday, according to the annual survey released today by the National Retail Federation and Prosper Insights & Analytics.

“Whether it’s heading to the stores after finishing their turkey or going online on Cyber Monday, consumers will be shopping all weekend and retailers will be ready to meet the demand,” NRF President and CEO Matthew Shay said. “Retail is a vibrant, dynamic and competitive industry, but one thing is certain – consumers are the winners no matter which day or which way they shop.”

Of those shopping this year, 65 percent said they are doing so to take advantage of deals and promotions retailers will offer, while 26 percent cited the tradition of shopping over Thanksgiving weekend and 23 percent said it is something to do over the holiday weekend and the same number said it is when they start their holiday shopping.

“While the long weekend always draws shoppers of all ages to take advantage of the irresistible deals and promotions that retailers are offering, we’re seeing a change in how the younger consumers see the weekend.” Prosper Insights Executive Vice President of Strategy Phil Rist said. “Compared to older generations, younger consumers under the age of 35 are more likely to be attracted by the social aspects of shopping over the weekend or by the fact that it is a family tradition.”

The survey, which asked 7,516 consumers about their shopping plans, was conducted October 29-November 7 and has a margin of error of plus or minus 1.2 percentage points. 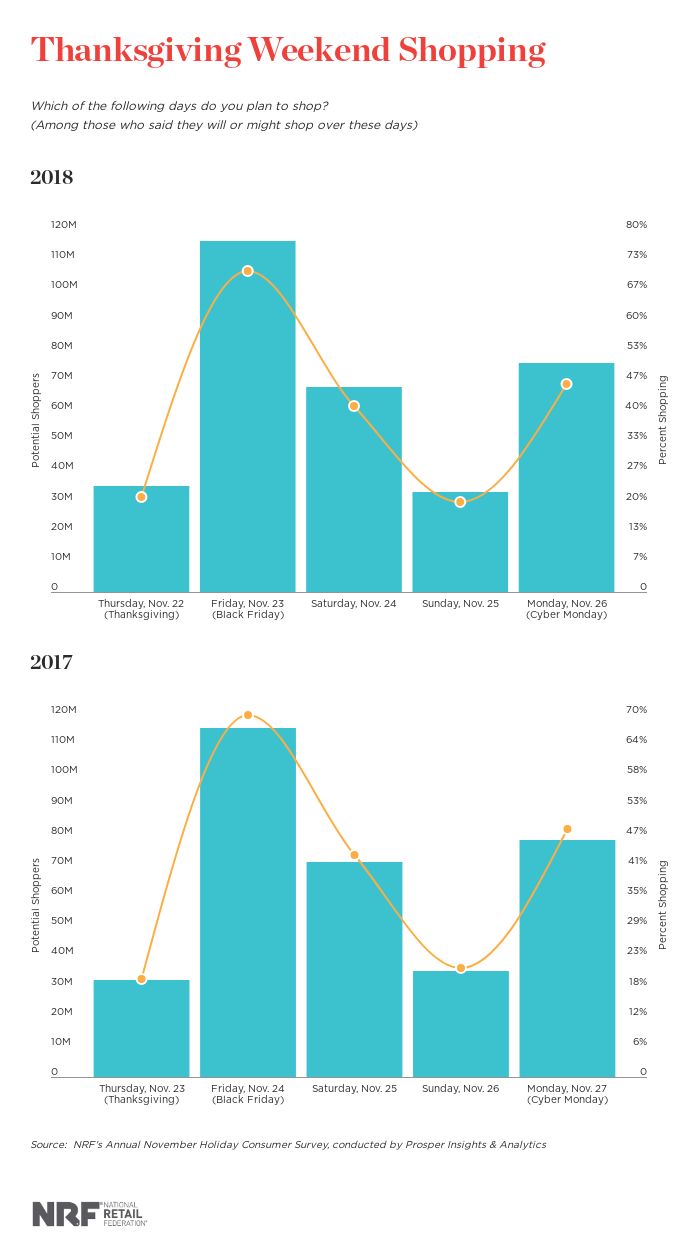 One thought on “Shopping Is on the Thanksgiving Day Menu”