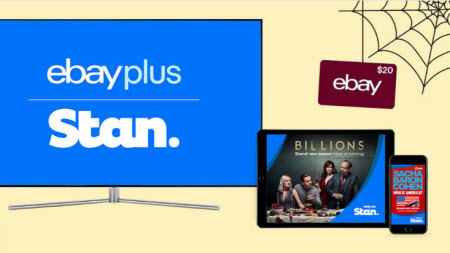 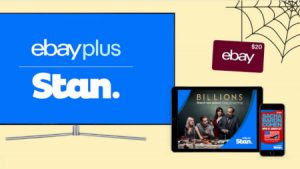 eBay is offering video streaming as an incentive for signing up to its Plus shopping membership program in Australia. The deal indicates eBay and Stan Entertainment Pty Limited are feeling the heat from Amazon, which entered the Australian market in December and launched its Prime membership program there in June.

Buyers pay $49/year to join the eBay Plus membership program, which launched in Australia in June. Members receive “free delivery and free returns on all eBay Plus listings, plus bonus flybuys points, exclusive deals and offers, as well as premium customer service.” Note that eBay Plus has some notable differences when compared to Amazon Prime: free delivery on eBay Plus items only applies to the standard postage service.

The current promotion offers 3 months of streaming video through Stan plus a $20 eBay gift card to shoppers who become a paid member of eBay Plus. It’s only valid for those who have not previously subscribed to the Stan Service and runs from October 15 – 31, 2018.

According to Ad News Australia, “This initial partnership between Stan and eBay, if successful, could be the precursor to a longer term relationship. It’s also one of the many moves eBay has made locally to future proof itself against Amazon, also reaching a partnership agreement with Australia Post in July to streamline delivery on behalf of sellers.”

eBay determines which items on its marketplace are “eBay Plus eligible,” and in July, eBay entered into a deal with Australia Post to offer a seller fulfillment solution powered by third-party vendor Fulfilio, which has warehouses in Sydney, Melbourne, Brisbane, and Perth.

The new logistics offerings are operated by eBay subsidiary Shutl, and Wortfilter offers details about the programs and the partners with whom eBay is working.

eBay deals such as those in Australia and Germany indicate it prefers (or is forced) to partner with third parties rather than develop its own Amazon-like services.