The USPS filed its shipping rates for 2019, and it’s making some drastic changes that will impact online sellers. It’s not an across-the-board rate change, so some sellers will be impacted more than others, depending on what kinds of packages they’re shipping, how far their packages are going, and which services they use.

The impact for online marketplace sellers is magnified because sellers pay commission fees on selling price plus shipping costs – built-in fee increases for eBay and Etsy every year without them having to announce fee hikes!

Readers have already voiced concern in the EcommerceBytes Blog over the proposal to change First Class Package Service (FCPS) to zone-based pricing, with sellers in the middle of the country being impacted less than those on the coasts.

Not only are costs and complexity a concern, but some sellers said they will have to manually edit their ecommerce listings to reflect the new zone-based pricing.

First Class Package Service: Headed to the Zone
The USPS positions First-Class Package Service (FCPS) as a lightweight (less than one pound) offering primarily used by businesses for fulfillment purposes. Currently it only matters how much a package weighs to determine its cost, but under the proposed 2019 rates, it will also matter how far the package is travelling.

Zone 1 is within the same areas as the shipper, and Zone 8 is the farthest distance – coast-to-coast shipping – and therefore, the most expensive.

We found it helpful to look at the chart Stamps.com compiled last year showing 2018 rates for FCPS Commercial Base pricing, which are still in effect. You can see that a 1-ounce package currently costs $2.66, no matter where it’s going, while a package weighing 15.999 ounces currently costs $4.94 no matter its destination.

We got bleary-eyed comparing the current (weight-only) rates with the proposed zone-based rates, but Eric Nash of Stamps.com did some analysis to help us put the changes in perspective. He said Zone 8, which applies to packages going all the way across the country in either direction – is seeing a significant Commercial rate increase (up 43 cents for 1 ounce, up $1.43 for 13 ounces).

Obviously this added complexity makes it difficult for sellers to determine the exact impact of the 2019 rate changes.

A Silver Lining?
There is a silver lining, however, according to Krish Iyer of ShipStation: zone-based rates makes it easier for sellers to compare rates across services and across carriers.

“This means that sellers would be able to make “apples to apples” comparisons between First-Class Package Service, Priority Mail, and the competitive offerings of other carriers since you then have essentially the same zones and transits that can be compared all at once. A zone-based pricing model then also means that sellers will “cherry pick” certain zones for First-Class Package Service where the cost versus transit time is low versus other services, based on the needs of the recipient purchasing their product.”

Iyer said it was important to know which services to use based on a delivery NEED versus a “knee-jerk” reaction of using a default service level.

“A yearly cost increase/general rate increase (GRI) is an excellent time to look at your specific shipping needs and determine the right mix of carrier services,” he said, “which include not only transportation/shipping costs but also packaging and technologies used.”

Stamps.com’s Eric Nash noted that Priority Mail Padded Flat Rate Envelope, a popular option for ecommerce sellers, is increasing by $0.45 to $7.55, while also noting the decline in rates for medium and large flat-rate boxes.

Stamps.com Observations about Other Priority Mail Changes
Nash called out some other key changes he said were worth noting:

Priority Mail Dim Weight: Watch Out for Large Packages
The USPS is changing its dim weight divisor to make it in line with that of its rivals UPS and FedEx. Dimensional weight affects large but light-weight packages, a reflection that they take up room so should cost more than they would if they were charged based on weight alone.

USPS said that new for 2019, “dimensional weighting will be extended from Zones 5-9 to all Zones, and the dim divisor will be changed from 194 to 166. This change will eliminate the need for balloon pricing, the existing proxy for dim-weight pricing in Zones L-4.”

Lowering the divisor means higher fees for those packages. 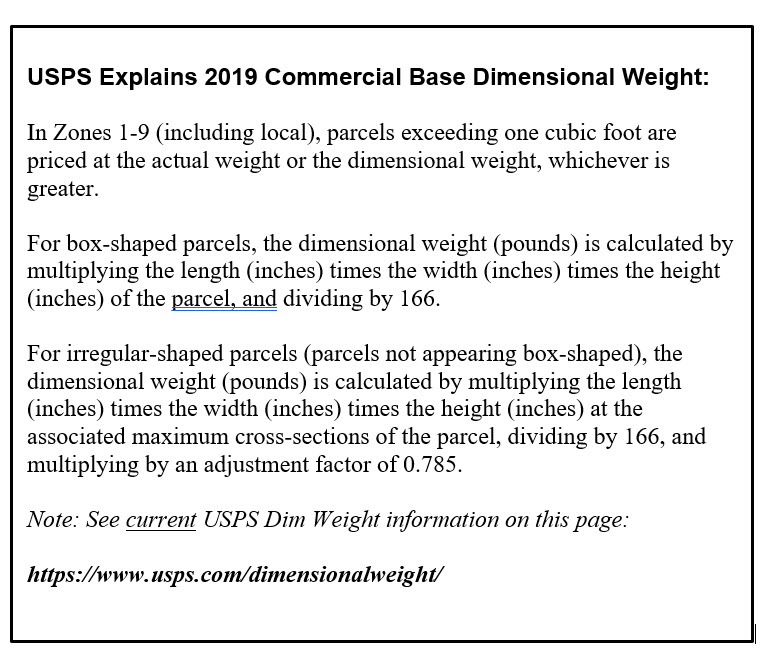 Hopefully this won’t impact many sellers; we’re not sure how UPS or FedEx rates would compare, it’s clearly worth taking the time to rate shop if you sell items that are impacted by dim weight pricing. One thing is painfully apparent: how do you explain to buyers why they’re paying over $42 for shipping a lightweight item?

Other Callouts
Stamps.com’s Nash shared some other changes worth calling out:

– For Parcel Select Ground, parcels weighing between 3-18 lbs. traveling to farther zones (Zone 5-9) are actually seeing a rate decrease in 2019.

Rates for many countries are not changing, including Mexico and Australia.

But Nash said heavier parcels that weigh over 2 lbs. traveling to Country Group 5, 6 and 9 are seeing a significant rate increase – that includes Western European countries (including UK, Germany, France, and Spain).

We expect Stamps.com and other postage providers to publish more analysis than we can include here. ShippingEasy published a blog post that includes the impact of Commercial Plus rates (for higher volume shippers).

Summing Up
Small sellers will continue to rely on USPS, which noted that, unlike its two major rivals, it does not add surcharges for fuel, residential delivery, or regular Saturday or holiday season delivery.

The PRC will review the proposed rates before they are scheduled to take effect on January 27, 2019. We’re not sure how they’ll rule on the *market-dominant* proposed changes that include a 10% hike in first class letter (the Postal Service wants to raise the cost of a Forever stamp from 50 cents to 55 cents, with a decrease in the rate for each additional ounce).

However, the USPS has far more leeway with raising rates for *competitive* shipping rates described here, and we expect the PRC to approve them. Keep an eye out for developments – we post news stories and blog posts on EcommerceBytes.com daily.

Here is a link to the USPS press release announcing 2019 rates. You can view the USPS Shipping Services filing price change tables on the Postal Service website, and you can view the Notice of Competitive Products on the PRC website (Docket No. CP2019-3).

Please let us know how the rates impact you by leaving a comment on the EcommerceBytes Blog.