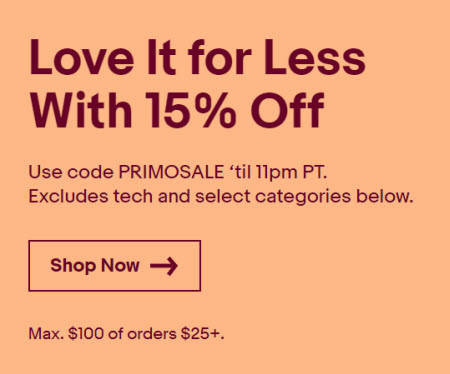 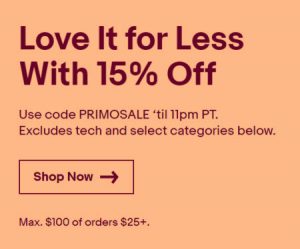 eBay is running another flash sale in advance of next week’s Amazon Prime Day shopping extravaganza. Tuesday’s flash sale was limited to items in the tech category, but Wednesday’s sale appears to be sitewide, applying to everything except tech along with some other additional category exclusions.

eBay had announced on Monday it would be running flash sales: “Exclusively this week, eBay is hosting one-day-only sales in its top categories from 5am – 11pm PDT on Tuesday, July 10 and Wednesday, July 11.”

Wednesday’s sale offers a 15% discount on orders of $25 or more and requires shoppers to use the coupon code PRIMOSALE.

Be sure to see the eBay Promotion landing page for details and restrictions – and take special notice of start and end times.