eBay has long offered ways for both buyers and sellers to help raise money for charity by having a portion or all of the proceeds of a sale go to the charity of their choosing, and today it launched a new way to do that through what it calls peer-to-peer fundraising.

This gives supporters a new way to donate besides the traditional cash-only models.

eBay does this by creating a link between the seller and the event, team, or participant they choose to support. eBay engineers developed two new web services to enable the new model: the Account Affiliation Service and the Transaction Reconciliation Service.

eBay kicked off a pilot with the American Cancer Society (ACS). Shortly after a seller has been paid for a charity listing, ACS will update fundraising goal meters on the event, team, or participant’s website to reflect the amount of the proceeds raised through eBay sales.

When you participate in a charity fundraising event like Relay For Life, you work with a team to raise money by having your friends and family donate on your behalf. But what if they could go to eBay, sell something and have that money go directly toward your fundraising goal?

Today, we are excited to announce a new peer-to-peer (P2P) fundraising tool in collaboration with eBay’s longtime charity partner, the American Cancer Society (ACS). With ACS, we’re making it easy for our community members to sell on eBay and have their proceeds go directly toward their fundraising goals for many of ACS’ Relay For Life events this Spring. The eBay platform can be used to help connect people and enable them to easily connect to the causes they care most about.

“At eBay, we’re continually innovating on behalf of our community, finding ways where we can use our technology as a force for good,” said Jon Barwise, Director of Product, eBay for Charity. “By launching this new fundraising tool on the heels of our record year of fundraising for charity, we’re excited to continue focusing on what we do best – technology-enabled commerce. Our technology and tools will help our charity partners extend their reach and drive a positive impact in the world, while enabling eBay to reach its 2020 goal of raising $1 billion in funds for charities.”

“The American Cancer Society popularized the peer-to-peer fundraising movement with the introduction of Relay For Life 32 years ago, which enlists more than 1.3 million participants at over 2,000 events in 27 countries,” said Irma Shrivastava, Senior Vice President for Strategic Marketing & Alliances for ACS. “The eBay partnership enables us to empower volunteers everywhere to turn any auction item into a powerful fundraiser directed to the event or team they choose.”

Selling for Charity
eBay for Charity has long provided our users the ability to dedicate proceeds of an item they sell to a cause that matters to them. In fact, in 2017, eBay sellers created more than 7 million charitable listings. eBay’s new P2P fundraising tool integrates open APIs from ACS and uses two new APIs that our team built, so you can easily list an item on eBay and have the money you’ve raised credited to your local Relay For Life or Making Strides event, team or participant. Getting started is easy: simply visit the ACS eBay for Charity page and click “Link Your Account.”

Once you sell an item in support of your chosen event, team or participant, ACS will update fundraising meters on its website to reflect the amount of the proceeds raised through eBay sales.

Our P2P model creates an opportunity for charities to raise more funds while giving supporters a new way to see how their efforts benefit a charity in real time. P2P fundraising on eBay joins existing fundraising tools available through eBay for Charity, including the option to donate 10-100% of proceeds of an eBay listing directly to a charity as well as Gifts that Give Back.

eBay for Charity by the Numbers

– To date, nearly $810 million dollars have been raised on eBay for Charity.

– Seven million charitable listings were created by the eBay community via community selling globally in 2017.

– More than 40,000 charities are represented on eBay for Charity.

Our P2P fundraising tool is now live on eBay. You can start fundraising for American Cancer Society today by visiting eBay for Charity. 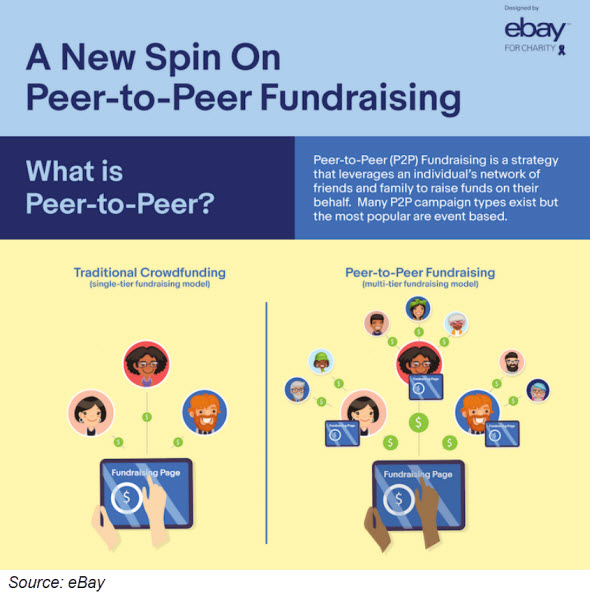