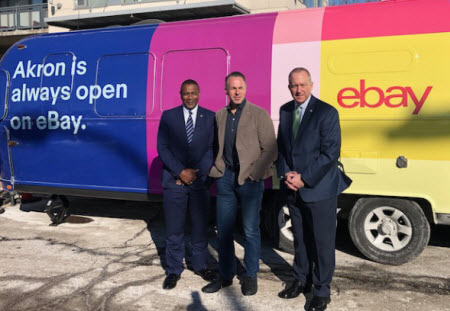 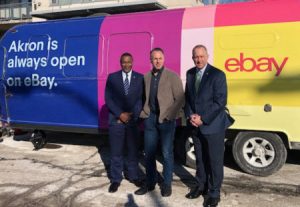 eBay is partnering with the city of Akron, Ohio in a pilot program to help small, local businesses “harness power of technology and participate in the global marketplace.” Retail Revival will provide Akron startups and established retailers with services, training, and marketing to help them expand their businesses through the eBay platform.

eBay CEO Devin Wenig was in the city on Friday where he gave a brief speech along with the mayors of Akron and the neighboring city of Warren. He noted that Ohio businesses did $1 billion in sales on eBay last year.

Between 30 – 40 Akron and Warren businesses will participate in Retail Revival, and the eBay CEO said the program would help them sell “not just in Akron, but around the world.”

Wenig also contributed an opinion piece in USA Today that was published on the eBay corporate blog. In it, he touched on some of eBay’s public policy agenda, including net neutrality and taxes:

“We need the government to facilitate investment in reliable, high-speed broadband in rural areas. We need net neutrality so that if small business owners build their own digital platforms, they won’t be disadvantaged. We also need fair taxation with appropriate small business exemptions, to allow small businesses in the U.S. to be able to compete and thrive.”

In anticipating what today’s announcement would be, some online sellers wondered if eBay was planning to build a warehouse of some kind (no doubt inspired by Amazon’s HQ2 announcement yesterday): “A new “Global Shipping Facility” opening in Akron,” one EcommerceBytes reader guessed.

“It’s probably land-based, and could involve a warehouse or other sprawling physical plant that will try to insert eBay into the domestic shipping process, in the same manner that they’ve tried with their Global Shipping Program for international selling,” wrote another.

One reader said they doubted it would be a fulfillment center: “most sellers won’t send their items into eBay.”

“Maybe they are buying a warehouse in Akron and finally shipping their own merchandise,” another reader speculated.

As it turns out, there is no physical infrastructure involved – WKYC provided more details about the “joint entrepreneurship program” in this article, which said the program would teach basic selling techniques on eBay and offer a complimentary eBay store subscription and starter kit.