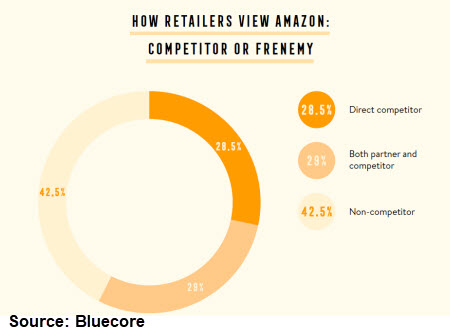 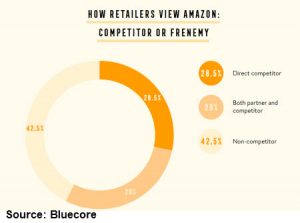 A new report details retailers’ struggles with Amazon. Bluecore surveyed retail executives in May and found 56% of those surveyed believe Amazon’s presence in their markets has increased in the past two years, and 30% currently sell through Amazon. Bluecore said many retailers are failing to act and advises them to use Amazon as a distribution channel. Among the other findings in the report: 63% of retailers believe free shipping for loyalty program members is one of Amazon’s most impactful consumer-facing technology initiatives.

Brand marketers know they need to combat the force of Amazon, but they lack the strategy, the marketing dollars and the digital resources to do so. In a report from Bluecore, the decisioning platform company illustrates retail marketers’ struggles with the giant competitor, highlights their failure to act and underscores the best way to overcome this challenge: Use Amazon as a distribution channel.

According to “A New Path for Retail: Co-Existing with the Force of Amazon,” 44 percent of retailers still do not know how to respond to the power of Amazon, while others are grappling with free shipping, email communications and better access to customer data to mimic what Amazon does best: Provide highly personalized and convenient experiences for customers. While better data and experiences are important, Bluecore’s experts say it’s time to stop fighting the inevitable and embrace the opportunity to sell products through Amazon.

“Brands are at a crossroads. The choice is: compete against a company that spends more than $10 billion annually in R&D or leverage that incredibly powerful distribution channel,” said Jared Blank, senior vice president of data analysis and insights at Bluecore. “Brands cannot ignore this partnership any longer. With an increasing number of Amazon Prime customers and more consumers beginning their product searches on Amazon, it’s simply ridiculous to think you’re going to succeed alone. The world’s largest brands are using Amazon as a distribution channel, and their revenue and earnings reports are seeing a sizeable uptick. It’s not about failing to go it alone, it’s about learning to co-exist with this eCommerce behemoth – and embracing the right strategies for your own digital properties to continue to build brand awareness and loyalty.”

“Amazon exceeds at listening to its customers. Coming anywhere close to Amazon’s success in this area will require retailers to capture data on customer behaviors and preferences and analyze that data to fuel more intelligent decision-making and more personalized experiences,” said Blank. “The intent is fantastic, but many brands are severely limited in their abilities to obtain and digest this level of data. Even with an exceptional data and customer experience team, the risks are just too high. It’s time to accept Amazon as friend, not foe.”

Other data uncovered within this report includes:

To publish this report, Bluecore partnered with NAPCO Research to survey more than 250 retail executives in May 2017. To read the full report, visit the Bluecore website.