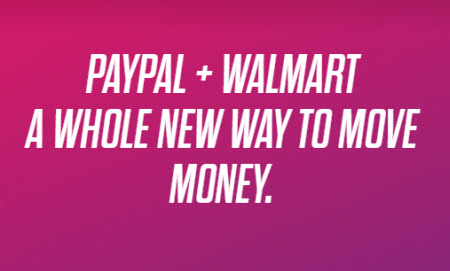 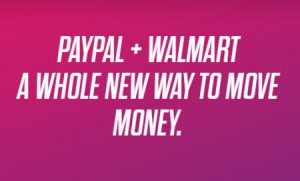 PayPal announced a collaboration with retail giant Walmart that gives “cash in, cash out” capabilities to PayPal customers. Beginning in November, people will be able to move money in and out of their PayPal accounts when visiting a Walmart retail store for a flat fee of $3.

This is the first time PayPal mobile app users will be able to take cash out of their PayPal account in a brick-and-mortar environment, in addition to being able to load cash into their PayPal balance at Walmart stores.

PayPal CEO Dan Schulman noted it was the first time the two companies worked together to build products for shared customers.

Schulman and Walmart executive Daniel Eckert appeared Thursday morning in a Facebook Live webcast where they discussed the “cash in-cash out” capabilities as a service particularly suited for the underbanked and unbanked (the latter meaning people with no access to a bank account).

Eckert cited a 2016 FDIC study that found 27% of the US population – nearly 90 million people – were either underbanked or unbanked. It’s a very mainstream issue, he said.

Thanks to Daniel Eckert, SVP of Walmart Services and Digital Acceleration, for joining me to discuss our collaboration that will help provide financial services products to our shared customers. We look forward to working hand-in-hand to help people and families with their financial services needs. Learn more about our collaboration here: https://www.paypal.com/stories/us/walmart-paypal-collaborate-on-products-to-help-joint-customers?categoryId=company-news

Schulman said he used to think of the underbanked as impacting only lower income demographics, but he discovered it also impacts what he called the new middle class.

While technology can help solve problems those consumers face, physical capabilities are also required, he said. “You can’t ask people to put cash onto a digital platform without being able to take that cash off.”

The agreement signals the beginning of a relationship that the companies say will grow. And with PayPal and eBay edging toward the end of their operating agreements following their breakup in 2015, it will be interesting to see what other ways the two companies may work together.

A PayPal spokesperson confirmed that Walmart.com has accepted PayPal “for many years” (here are Walmart.com’s accepted forms of payment), but he did not address our question about whether there were any plans for Walmart retail stores to begin accepting PayPal, which would be a next logical step.

More information about the PayPal cash-in cash-out feature at Walmart retail stores can be found on the PayPal website.