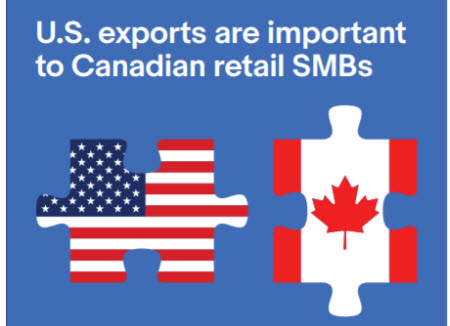 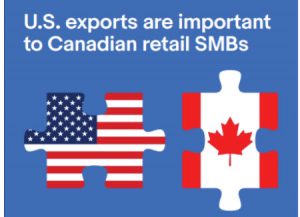 eBay published a report showing sellers in Canada are highly reliant on US exports. While optimistic, they face challenges in selling into the US market.

eBay said nearly half (47%) of exporting retailers project their export sales will increase over the next five years (with 13% anticipating a significant increase), and they are far more likely than their non-exporting counterparts to believe that there are new market opportunities for their business, both international and domestic (79% vs. 49%, respectively).

While 54 per cent of SMBs believe increasing exports is important for continued business growth, the vast majority (93%) cite challenges to selling internationally.

Not surprisingly, sellers sited the following challenges as the most common barriers they face: shipping costs (52%), efficient shipping options (34%), trade policies and tariffs (30%), and Canada’s cross-border trade relationship with the U.S. (30%).

eBay Canada & Latin America General Manager Andrea Stairs said, “Exporting is key to unlocking growth opportunities, and technologies like ecommerce and global marketplaces like eBay are democratizing global trade like never before – there is good reason for increased optimism among the Canadian SMB community. Given its size, proximity and similarities to Canada, the ability to tap into U.S. market demand is particularly vital for Canadian SMBs looking to scale.

– eBay sellers are more likely than those who don’t use the platform to believe that their export sales will increase over the next five years (60% vs. 40%, respectively).

– eBay sellers are twice as likely as non-eBay sellers to indicate that international sales are performing well for their business (64% vs. 26%).

– A quarter (25%) of SMBs on eBay who currently export to the U.S. see the majority of their overall revenue from this market – with 27% of SMBs projecting their majority of sales coming from the U.S. in 2019.

– Four out of five (80%) eBay sellers think a trade deal with the U.S. is important for their business, versus 53% of non-eBay sellers.

See the full release with infographic on the eBay Canada website.