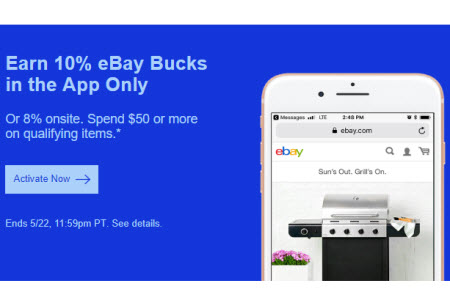 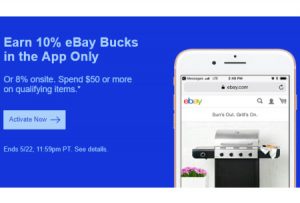 eBay is running some variations of a promotion to entice buyers through its eBay Bucks program. A seller who forwarded two invitations said, “I received the 10%/$50 minimum promo in my personal account, and the 8%/$25 minimum in my wife’s store account.”

“Apparently lots of multivariate testing going on in eBay land…,” he wrote, and wondered how many variations of the promotion eBay might be running.

Interestingly the promotion offered a more advantageous enticement if the buyer made a purchase through the eBay app.

One of the promotions the eBay Bucks participant received stated:

The other offered 10% eBay Bucks in the app, or 8% onsite, with the requirement that the buyer spend $50.

The promotions end on May 22nd and are just one of many eBay has been running to lure shoppers to its site.