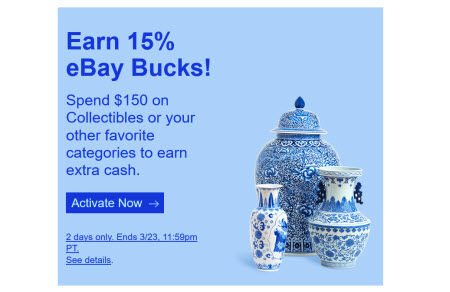 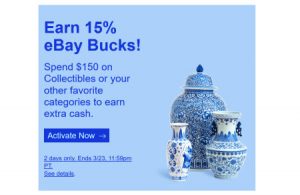 eBay is running a promotion in an effort to boost sales of high-priced items. The 2-day campaign gives shoppers enrolled in its eBay Bucks loyalty program 15% in eBay Bucks on every qualifying item of $150 or more.

eBay is also running a promotion for sellers designed to get them listing high-priced goods. Those invited to participate and who activate the promotion receive 40% off final value fees for sales of $250 or more. That promotion is running from March 15 through March 29, 2018.

The eBay Bucks promotion kicked off today (Thursday) and runs through March 23rd – only invited members can participated.

According to the terms of the promotion, rewards are capped at $100 per transaction and $500 per earn period.

One shopper reported a variation of the promotion in which eBay added a component: “Mine was like yours plus an 8% for anything over $50” – so be sure to read the details of any invitations you receive.

Another member of the eBay Bucks program said they received an invitation for a promotion in which he would receive 8% bonus eBay Bucks on items he sold from the 17th through the 27th.

A reader who alerted us to the eBay Bucks promotion said he’s been receiving similar promotions nearly every week of late. A user on the eBay boards also noted their frequency, writing, “This Q1 end of quarter month had more promos than snowflakes in the northeast.”