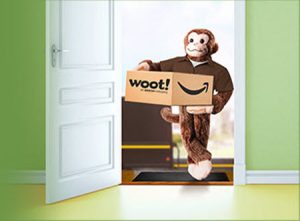 Amazon launched another benefit for Prime members: free shipping on its Woot.com deals site. By giving Prime members more perks, it helps retain them. The program now costs $99/year, and it’s conceivable Amazon could at some point break the $100 barrier.

The move also has the obvious benefits of getting more Prime members by providing an incentive for Woot customers to sign up for Prime for those who hadn’t already, and boosting sales on Woot.com by Prime members.

Woot.com started as a daily deal site in 2004 that offered one product a day until sold out. It appealed to competitive shoppers and offered entertainment through irreverent product descriptions. Member engagement was key as buyers rushed to post their success (or failure) in scoring the deal of the day and to discuss the pros and cons of the product itself.

Woot itself was a wholesale distributor acquiring inventory from manufacturers and selling it through a number of channels, including the Woot website.

Woot sold to Amazon in 2010 and the founders eventually went on to launch another site called Meh. Today Woot.com offers special daily deals and other limited-time offers across seven categories, including computers, electronics, home and sporting goods, and original t-shirts.

The more Amazon consolidates shipping across its properties the greater the scale it achieves for both its own logistics operations and for gaining greater leverage when negotiating rates with shipping carriers.

Amazon Prime members get free shipping on Woot.com if they log in to Woot with their Amazon account at woot.com/prime.