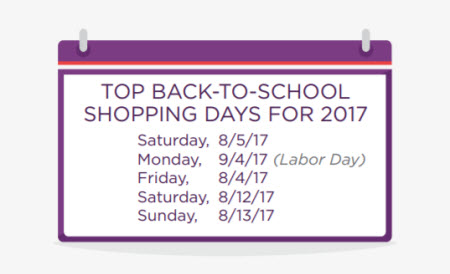 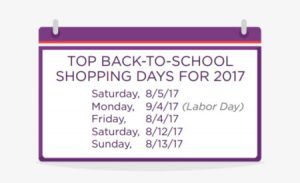 RetailMeNot predicts August 5th will be the top shopping day for the back-to-school season, which actually spans between July 9 and September 9. Its survey also found most retailers and brands will offer more back-to-school deals in 2017 compared to last year.

Here’s the press release with more details about this year’s back-to-school shopping season:

RetailMeNot, Inc., a leading digital savings destination connecting consumers with retailers, restaurants and brands, both online and in-store (retailmenot.com/corp), released its 2017 Retailer and Consumer Back-to-School Insights Guide, which reveals retailers plan to be more promotional to give consumers the deals they want.

Retailer 101
In a survey conducted by Kelton Global and commissioned by RetailMeNot, 40 percent of retail marketers began their promotions as early as May, and 85 percent plan to invest more in their back-to-school marketing efforts this year compared to 2016 – largely by investing in mobile and social media.

More than ever, shoppers indicate they want a seamless, integrated shopping experience; yet, nearly 1 in 10 retailers indicated they do not have an omnichannel promotional plan for this season.

“Discounts and deals are incredibly important this time of year to both retailers and shoppers. Parents want to maximize their spending power and are increasingly turning to mobile as part of their shopping journey,” said Marissa Tarleton, chief marketing officer, RetailMeNot. “For retail marketers, the opportunity to capitalize on omnichannel offers is more important than ever to reach consumers online, on mobile and in store. Consumers are seeking discounts, and it’s imperative that retailers and brands meet them where they are with compelling content.”

The shopping journey isn’t limited to just one channel this season. More than half of shoppers (54 percent) surveyed do the majority of their back-to-school shopping in a physical retail location, and nearly 1 in 3 (28 percent) always search for items online before going in store.

“As we get closer to the start of school, shoppers will move from consideration to purchasing, and the retailers who have seamless experiences will benefit the most,” said Tarleton.

RetailMeNot’s Cheat Sheet
RetailMeNot data shows consumers are likely to do the bulk of their spending in August. Our data predicts the top shopping day will be August 5. While other top shopping days will occur in the first two weeks of August, the number two biggest back-to-school shopping day is predicted to be on Labor Day, September 4.

The back-to-school shopping time frame is the longest shopping season in the U.S., lasting nearly three months. The highest level of consumer engagement with back-to-school content on RetailMeNot happens between July 9 and September 9.

The widespread use of mobile and social to shop around means more opportunity for retailers to get in front of deal-hungry consumers before they pull out their wallets.

For more information, and to learn more about how promotions can connect retailers to shoppers both online and in-store with RetailMeNot, download the full 2017 Retailer and Consumer Back-to-School Insights Guide.

Methodology
A Google Consumer Survey was conducted between June 6 and June 12, 2017, in which 1,000 U.S. consumers aged 18 and over were surveyed regarding their back-to-school spending and deal-seeking goals. A RetailMeNot, Inc. retailer survey was conducted by Kelton Global between May 11 and May 16, 2017, among 201 marketing decision-makers who work at organizations that sell products both online and in physical retail locations, using an email invitation and an online survey. Quotas are set to ensure reliable and accurate representation of the entire U.S. population ages 18 and over.