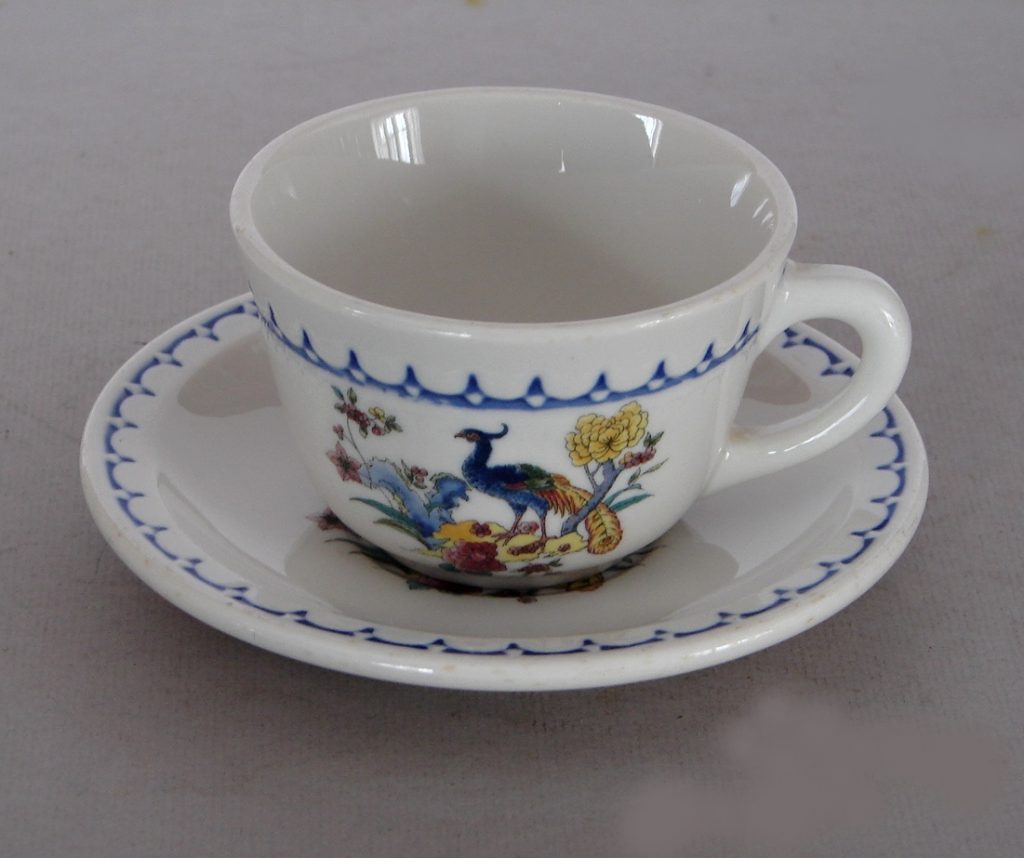 Back in the glory days of over-the-rails passenger transportation, railroad companies strove to create an atmosphere of luxury aboard their trains. A critical part of making travelers’ experiences splendidly upscale was providing actual chinaware on dining car tables and depot restaurants. Today’s collectors are richly rewarded discovering and saving surviving pieces, not only as a way to preserve historical artifacts but also to learn more about America’s transportation history.

The term “railroad china” is incorrectly used by many people as a generic term for heavyweight, commercial dinnerware, like “Kleenex” meaning facial tissue. Railroads did use heavy dishes, but also purchased fine porcelain, including high-end Bavarian and French Limoges – depending on how it was to be used.

Two railroad china collector books will help as much learning how to avoid fakes as they do with learning about authentic patterns. These are Dining on Rails by Richard Luckin and The Official Guide to Railroad Dining Car China by Douglas McIntyre. Both are out of print, but can be found on the internet and used book seller sites. To have one of them is essential; to have both is far better. While they complement each other in many ways, one or the other sometimes offers more in-depth comments on a subject.

Because of the “romance of the rails” mystique captivating the public, railway relics for many years have enjoyed higher prices than similar but non-transportation items. Novice collectors must learn to recognize not only non-railroad sellers who unwittingly overprice their items, but also dishonest scammer sellers deliberately trying to profit by selling fakes and phonies. To avoid these pitfalls, start slowly but try to learn fast. Buy what you appeals to you that would keep – do not buy hoping for a fast turnover and big profit.

Don’t be discouraged if you do happen to become a victim. Remember that every novice collector certainly will be fooled at least once, and every seasoned collector started out as a novice.

Railroad china is a terrific collecting area in part because choices are so varied. You can collect anything and everything; or any type of piece but only from one or two railroads. You can home in on one type of piece such as small pitchers, cup and saucer sets or plates or build on a color theme. The imagination is the limit.

For a total novice, the easiest and safest way is to pick a pattern that includes the railroad name in the decoration and stick with patterns shown in the book(s). The likelihood of finding a previously undiscovered pattern carries about the same odds as winning the Lottery.  You might start with a lower end pattern (ranked in the books as 1, 2 or 3 stars out of a possible 5), which should be more available and easier to find than 5-star patterns, which are rare and expensive.

Condition is critical in railroad china. Damage and flaws make a huge difference in value. If a piece is extremely rare, somewhat less than perfect can be tolerable, but damage on a low end piece can make it worthless. That said, surface marks from utensils documents actual use by railroad passengers. Minimal scratching is acceptable, but it should not be so heavy as to have worn off the glaze.

Another complication is that railroad china was so varied. Many patterns are easy to spot, custom made with names and logos in the decoration. Others are what is called “Exclusive patterns” with no railway markings, but a unique design that the china company made and sold ONLY to its railroad customer. And sometimes railroads purchased “Stock patterns,” ready made ware available for any customer to buy.

Indeed, getting into this hobby is challenging! but it is a terrific way to learn more about American transportation history and the critical role played by the railways. The best advice – the same as with other collecting interests – is to start slow, buy what you like instead of trying to make a profit, and enjoy!

Disclaimer: Guides are submitted by readers and the views expressed belong solely to the author.

The little depot in the photo is Silvernails, New York - a "family heirloom" since an ancestor named Egbert Silvernail fought and won against the Central New England Railroad, demanding a post office be included with their proposed station and rail line across his fields north of Pine Plains. As for me, I have been in the railroadiana world for about 30 years. Because I enjoy the treasure hunt so much, and especially uniting collectors with sought-after items, I buy/sell rather than "collect." We belong to Key, Lock & Lantern, The Railroad Collectors Association Inc. (RCAI), the Rutland Railroad Historical Society and the New York Central Historical Society.

Under my business name Time's Treasures LLC, I have been a shop owner selling on Ruby Lane since 2000, and recently opened a store on Etsy. I also rent space in a terrific antique group shop in Eagle Bridge, New York. The Railroadiana world has given us wonderful experiences making new friends and learning about transportation history in the USA.