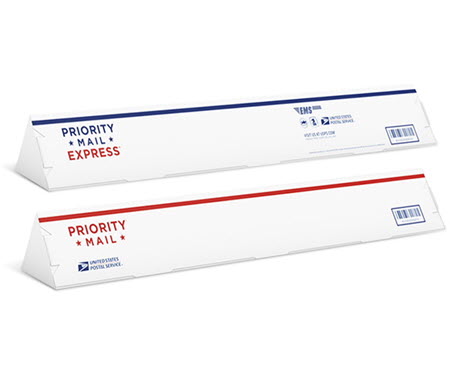 In a small corner of the ecommerce world, some sellers have been sounding the alarm over the USPS decision to price mailing tubes and other long packages out of the market. The move shows a new approach the USPS is taking that has broader implications for the shipping industry.

In 2021, online sellers began reporting significant problems with mailing tubes shipped via USPS. One small seller who sold movie posters on eBay surmised it signified a change in the USPS sorting processes, telling EcommerceBytes in July the USPS had become “constantly unreliable in delivering tubes on time or without incredible delays.”

Another merchant who sells movie posters on eBay and runs the multi-million-dollar business eMoviePoster.com told EcommerceBytes last year he was also seeing delays as well as a tenfold increase in damage to his posters shipped via USPS.

Rather than finding a solution to processing the awkward-sized packages, the Postal Service under the helm of Postmaster General Louis DeJoy appears to have taken a more “corporate” approach to the problem – raise rates to the point of making them unprofitable for many shippers, thus reducing the number of them entering the mail stream.

The “nonstandard” fees added to regular postage costs go into effect on Sunday (April 3) and apply to packages that are longer than 22 inches:

“I will soon take down all my single golf clubs,” an eBay seller named Harry told EcommerceBytes on Thursday. “Putters and wedges will fit in an unaltered 38″ Priority Box, but nobody is going to pay $15 more on April 3 because the box is longer than 30″ except for the most valuable clubs.” He planned to end many of his eBay listings today and turn to the occasional local flea market instead.

Another seller who sells plants on her own website and on Amazon told us on Thursday that the new surcharges would nearly put her out of business, as the majority of her plants are large.

Sellers in many categories are affected – a seller of fishing poles said even 2-piece rods measure between 33 – 36 inches before boxing but said it would affect many other items as well, including baseball bats and windshield wipers.

“I sell hundreds of everyday fishing rods, average $10-$20 a piece per year,” the seller told us on Saturday, half of which go into USPS triangle boxes and the other into custom boxes.

The seller shopped around for rates for the recent sale of a 6-foot fishing rod going four states away and found USPS would currently cost $8.24. By comparison, UPS Ground would cost $20.15, while FedEx Home would cost $39.38.

“So as of today, UPS and FedEx are way more, that’s why I don’t use them,” the seller said. “Plus they won’t pick up at my home, so that’s a 14 mile one way drive to a drop off point, added gas as it is UGH. Plus from what I’ve read, they both can add the “extra mile” fee without notice and I wouldn’t know until I get the bill. So you can see when you add the $15 surcharge, USPS shipping jumps to $23.24.” (We did not verify the rates the seller cited.)

The USPS first buried news of the new fees in its November 2021 announcement of new January 2022 rates. We reported on the surcharges in November in “Mailing Long Skinny Items Like Posters Is a No-Go in 2022,” where we suspect many in the shipping industry first read about them. By December 3rd, the USPS announced a delay in implementing the new surcharges

“This brief delay is intended to provide the industry with additional time to plan and adjust for these changes,” it informed the Postal Regulatory Commission, “and aligns with our intent to be judicious in our pricing decisions and responsive to the needs of our customers.”

The USPS had made a point of stating in its November announcement that the January rate increase was an average “3.1% increase for Priority Mail service” and wrote, “Unlike some other shippers, the Postal Service does not add surcharges for residential delivery or regular Saturday delivery.” Yet it failed to point out it was adding steep new surcharges for nonstandard packages. (The USPS is also adding a $1.50 surcharge when shippers incorrectly enter the dimensions of their package.)

What’s surprising is how quiet online marketplaces have been about the new surcharge fees. They may get a rude awakening as sellers find a host of items they can no longer profitably sell on their platforms.

The question they may want to ask is, what’s next on the list of pesky packages the USPS no longer wants to handle?